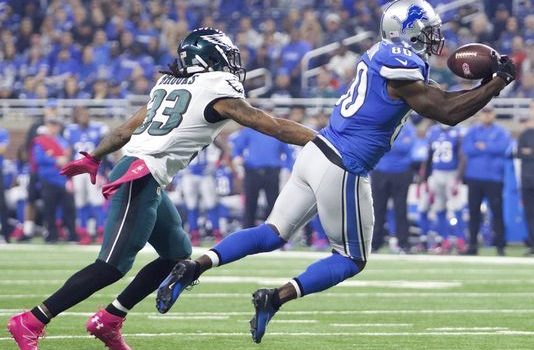 ALMOST-AN-EAGLE BOLDIN QUIT BECAUSE OF CHARLOTTESVILLE!

He spent last season with Detroit, where he had 67 catches for 584 yards and eight touchdowns in 16 games. Boldin, a former Florida State star, spent his first seven NFL seasons with Arizona, then played three years with Baltimore and three with San Francisco. He helped the Ravens win the Super Bowl in February 2013.

The recent racial conflict in Charlottesville, Va., prompted Anquan Boldin to leave the Buffalo Bills and retire after 14 NFL seasons.

In an interview yesterday on SiriusXM NFL Radio, Boldin — who had come close to become an Eagle last year and several years ago when he was an Arizona Cardinal — said he was “uncomfortable” with how divided the nation was and wanted to dedicate his entire focus to humanitarian and criminal justice causes.

“I always felt like football would be my passion, football would be the path to a lot of things,” Boldin said. “But just seeing the things that transpired over the last week or so, I think for me, there’s something bigger than football at this point.”

He then clarified that he was referring specifically to what happened in Charlottesville on Aug. 13, when a counterprotester was killed during a rally involving neo-Nazis and other right-wing groups.

“Do I think I can solve all the problems that we have in this country?” said Boldin, a 36-year-old receiver. “Of course not. But I think I have a duty to stand up and make my voice heard and be a voice for those who don’t have a voice.”

The 2015 Walter Payton Man of the Year, Boldin oversees the Q81 Foundation, based in South Florida, which offers educational support for underprivileged children. He has become an advocate for criminal justice reform since his cousin was killed by a plainclothes police officer along the side of a Florida highway in October 2015.

Boldin spoke to SiriusXM a day after abruptly informing the Bills he was retiring, about two weeks after signing a one-year contract with a base salary of $1.75 million.

Boldin insisted his decision had nothing to do with the Bills’ trading their top receiving threat, Sammy Watkins, to the Los Angeles Rams on Aug. 11, or how the team’s offense struggled in a 20-16 preseason loss at Philly on Thursday.

Boldin ranks in the top four among active receivers with 1,076 catches, 13,779 yards receiving and 82 touchdowns receiving.