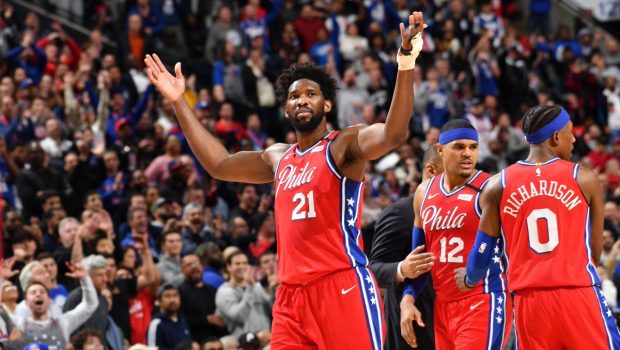 ALL OF A SUDDEN SIXERS LOOK LIKE THEY CAN GO DEEP IN PLAYOFFS!

With 27 regular season games left, the Sixers amazingly enough appear to have figured a few things out!

They beat the LA Clippers 110-103 Tuesday night for their NBA-best 25th homecourt win of the year.

Which proved they can beat every contending team in the Association, one gauge used to win the NBA Finals next June.

After 55 games they have defeated the Clippers, Lakers, Bucks, Raptors, Celtics, and Heat, all possible playoff matchups.

Finishing 4th would ensure them of a home-court advantage in the first round.

Better yet, Brett Brown made it easier for stars Joel Embiid and Ben Simmons to play together to their highest capabilities.

In the win over LA they both scored 26 points, most likely their best game together as 76ers. Simmons also dialed up his second straight triple-double — 26 points, 12 rebounds, 10 assists — joining Sixers legend Wilt Chamberlain as the only players to record back-to-back trip dubs, very impressive company!

Moving Al Horford to the bench was also significant, freeing up more room for Embiid to maneuver around the painted area. Jo got many more one-on-one looks close to the hole.

With eight days off before the next game, Brown has some time to integrate the new players into the offense with Horford beefing up the second unit the rest of the way.