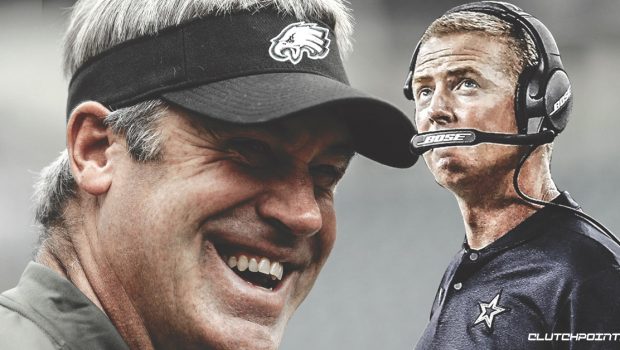 ALL EAGLES EAST RIVALS HAVE NEW BOSSES: DOES THAT EVEN MATTER?

So, the Eagles open training camp today at NovaCare in South Philly, and the conventional wisdom in the media and the Nation is that they have an advantage over their NFC East rivals, all of whom have new coaches because Doug Pederson has been the Birds’ head man since 2016.

But what if the CW is wrong, as it so often is?

New head coaches were hired by the Cowboys, Giants and Washington, which means new schemes and ways of doing business that had to be communicated to players virtually during the spring. The Eagles, on the other hand, will have the same systems in place with a high number of returning players from last year’s division champs.

During a conference call, Pederson was asked about that difference. He said he thought it would be “extremely tough” to take over a team under these circumstances and that the lack of upheaval is a reason for his team to feel confident.

“We’ve been blessed. I’ve been blessed going into my fifth year here in Philadelphia and maintaining the staff that I have and adding some great additions to the staff this year,” Pederson said. “And our players are excited because they are not having to learn a necessarily new offense or defense or special teams. So I’m not necessarily thinking it’s going to be a leg up, but at the same time, it does give us confidence going into camp that we all are on the same page.”

With training camps opening this week, the other NFC East teams will start working in earnest to make up for whatever edge the Eagles may have as a result of the continuity on their staff.