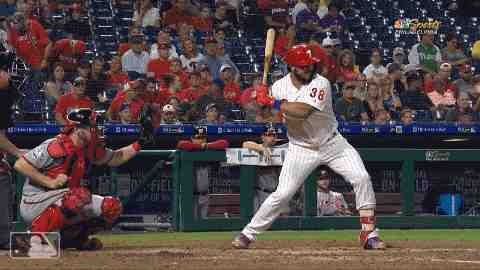 ALFARO’S 3-RUN JACK MOVES PHILS TO WITHIN 5 1/2 GAMES OF BRAVES!

Jorge Alfaro hit a go-ahead, three-run homer in the sixth inning and the Phillies rallied past the New York Mets 5-2 to keep their playoff hopes alive.

Ace Aaron Nola served up a home run by starter Steven Matz that made him the third Mets pitcher to go deep in consecutive appearances.

The Phillies’ third win in 10 games moved them within 5 1/2 games of NL East-leading Atlanta, which lost 8-1 at St. Louis. And the Phillies insist they still have a shot with 12 games left.

“We have a chance for sure,” Nola said. “We have seven games (coming up) against the Braves.”

Wilson Ramos and Justin Bour delivered pinch-hit RBI hits in a five-run sixth before Alfaro drilled a curveball from Drew Smith (1-1) to left-center for his 10th homer.

And with that, Matz’s eventful performance was wasted by the Mets.

The left-hander had zero homers in his first 70 major league games before connecting last Thursday against Miami. He entered Tuesday hitting .093 (4 for 43) this season and .140 in his career, but lifted a curveball to left against Nola in the third that just cleared the wall and withstood a video review to put New York ahead 1-0.

“I don’t really know,” he said, smiling. “I have no explanation for you.”

The other Mets pitchers to homer in back-to-back outings were Hall of Famer Tom Seaver (1972) and Ron Darling (1989).

Matz worked around five walks and gave up two hits in five scoreless innings. He also snagged a line drive behind his legs to start a double play, before the bullpen faltered and the Mets’ bats went silent.

Pat Neshek (3-1) relieved Nola and got the final out of the sixth. Seranthony Dominguez, Tommy Hunter and Hector Neris each pitched a scoreless inning as the Phillies improved to 7-11 against the Mets this season.

Neris earned his 11th save.

Nola allowed two runs and six hits with nine strikeouts and two walks in 5 2/3 innings as his ERA climbed to 2.44. He’s given up eight home runs in September after allowing seven over the first five months of the season.

Connecting against Nola, one of Mets ace Jacob deGrom’s competitors for the NL Cy Young Award, was not lost on Matz.

“I told him, that was for you, friend,” Matz said.