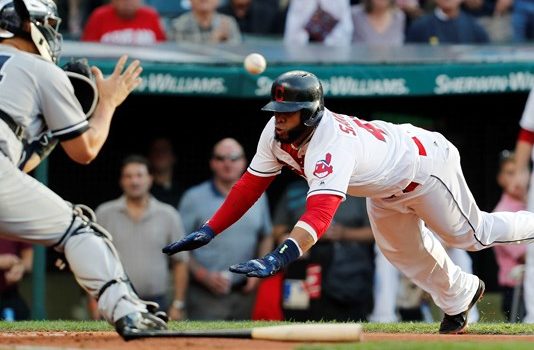 ALDS GAME 1’S: INDIANS AND ASTROS RISE TO THE OCCASION!

Behind an overpowering outing by Trevor Bauer and some offensive heroics from Jay Bruce, the Cleveland Indians took Game 1 of the American League Division Series with a 4-0 victory at a loud and raucous Progressive Field.

It marked the first step in the Indians’ quest to not only win consecutive AL pennants, but to finish what they could not last fall: Bring home their first World Series title since 1948.

“It couldn’t have gone any better for us,” said Bruce, who homered and drove in three runs. “It’s a dangerous team with all the guys that can leave the ballpark with one swing, and the guys that run the bases well. I mean, they have a very dynamic lineup over there, and for us to show them none of that was important.”

The depth of Cleveland’s pitching staff created flexibility for manager Terry Francona, who surprised plenty of people when he opted to hand the ball to Bauer, not ace Corey Kluber, for the ALDS opener. Bauer answered the call by cruising through 17 consecutive batters before relinquishing a hit to Aaron Hicks in the longest no-hit bid (5 1/3 innings) in Indians postseason history.

“Trevor has always been more of a big-game guy, wanting that spotlight,” Callaway said.

Now armed with a 1-0 lead in the series, the Indians will turn to Kluber for today’s Game 2, when the Yanks will counter with former Tribe ace CC Sabathia. In Division Series history, the team who has won the first game has gone on to win 66 of 92 series.

“This has been a guy we’ve relied on heavily after losses this year, and he’s pitched some of the biggest wins for us during the course of the year,” Yankees manager Joe Girardi said. “He’s been in a ton of these games, and you know that there’s no situation that is too big for CC.”

Sonny Gray’s Yanks postseason debut lasted just 3 1/3 innings, as the right-hander struggled with his command. Issuing four walks while also hitting a batter, Gray was charged with three runs on three hits. Cleveland’s biggest blow off Gray came in the fourth, when Bruce followed a leadoff walk to Edwin Encarnacion with a towering two-run homer to right field.