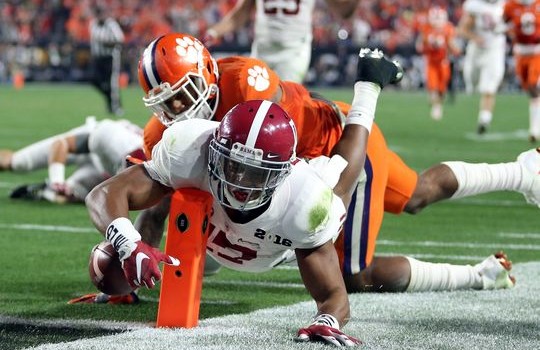 ALABAMA BEATS CLEMSON 45-40: A GAME LIVES UP TO NATIONAL TITLE!

He has now won five national titles, staking his claim as arguably the greatest coach of all-time. But Nick Saban has never had to overcome an opponent like this with so much on the line, making all the more impressive what Alabama did Monday night to beat No. 1-ranked Clemson for the College Football Playoff title 45-40.

Frustrated again by a spread offense and a superstar dual-threat quarterback that kept Alabama on its heels most of the night, the Crimson Tide found a deep reserve of guts and guile in the fourth quarter at University of Phoenix Stadium, securing Alabama’s fourth championship in the last seven years.