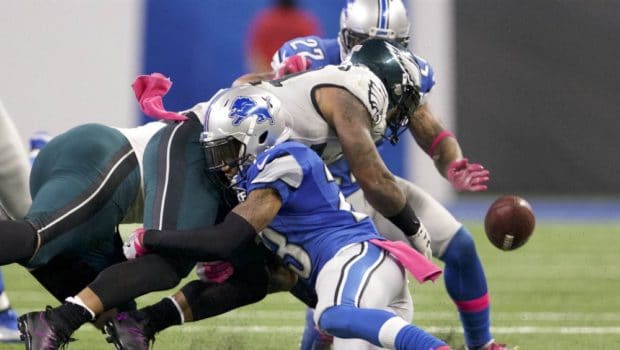 The Eagles played a mistake-free first three games, and everyone was wondering when that would end.

Ryan Mathews chose a horrible to do make that first mistake, and it cost the Eagles their first loss of the 2016 season.

The Eagles were up two points with under three minutes left when Mathews fumbled the football.

Detroit recovered and took over at the Eagles’ 45-yard line. A subsequent field goal by Matt Prater gave the Lions the late lead. The Eagles fell to Detroit 24-23.

“I just can’t let my teammates down, especially when my number’s called like that,” Mathews said after the game. “I have to be able to make a play and be smart. It hurts. It stings a lot, but it’s over now. You can’t go back and replay it. You just have to move forward and get better.”

The win was in the Eagles’ sights, but Mathews’ costly turnover changed the course of the game. The running back has had fumbling issues throughout his entire career. Mathews has fumbled the football 19 times in his seven years in the league.

Coach Doug Pederson was asked about the decision to run the ball outside the tackles on the third down play in which Mathews fumbled.

“Yeah, I mean hindsight is obviously 20/20, but the thing is in that situation, in kind of knowing them and studying them, that’s an aggressive situation, kind of a got-to- have-it situation and I felt like getting the ball on the edge with guys out in front was our best possible play at that time to get the first down,” Pederson said. “We didn’t execute properly.”

It was inevitable that the Eagles would break their turnover-less streak, but Mathews’ fumble late in the fourth quarter was costlier than most. Mathews and the Eagles will try to get back to playing efficient football when they face Washington next week.