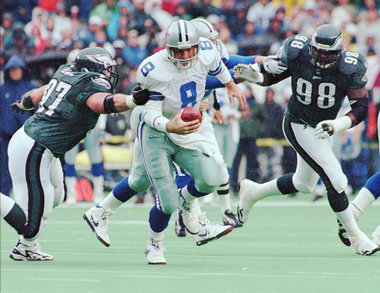 AIKMAN: EAGLES AND CHIP NEED TO SLOW TEMPO AGAINST COWBOYS

Former Cowboys great quarterback Troy Aikman (above) will be the analyst tomorrow alongside play-by-play man Joe Buck when the Eagles and Cowboys meet at 4:25 on Fox.

So, it might be useful to heed what Aikman has to say:

“There are some things that concern me about the Eagles. Let’s look at last year. Where they struggle is when they have leads and how then do they take time off the clock. And I’ve talked to Chip (Kelly) about it and…of course there are times when you do slow it down (but) for the most part he’s playing at breakneck speeds.

“And this year may be faster than he was a year ago which is hard to imagine. I think sometimes that can be detrimental both to an offense as well as your own defense. And then the turnovers that they had last season were certainly an issue.

I like Philadelphia and I’ve said that all along the offseason but I think part of controlling tempo doesn’t always mean it’s up-tempo. Good offenses in my opinion have the ability to speed things up when they have to and then slow the game down when they have to. And I just don’t see that part of it enough in Philadelphia. In a game like this for instance where you have the Cowboys’ offense, even without Dez Bryant, that’s capable of scoring a lot of points I think you have to help your defense out.”