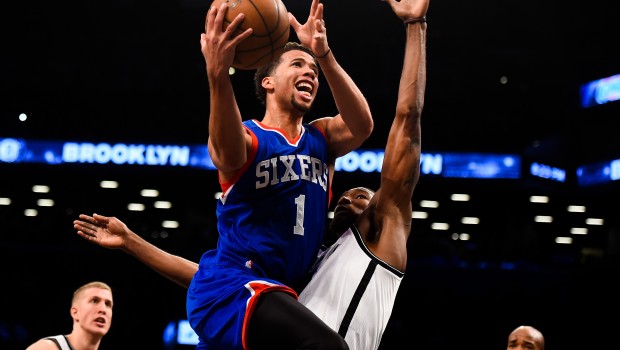 The Sixers are setting new standards for ineptitude with each game they play.

They lost last night in Brooklyn 84-70 to the Nets, which is bad enough.

But they were ahead 45-44 at halftime, which means they scored just 25 points in the entire second half.

Which calculates to 25 points in 24 points.

The Radnor High girls team does better than that.

The Sixers shot just 8-for-34 (23.5 percent) in the second half while committing 11 turnovers that led to 15 points, allowing the Nets gradually to pull away while barely cracking 40 percent themselves.

The Nets forced the Sixers into eight straight misses to open the fourth quarter, creating a string of 13 consecutive misses going back to late in the third. That allowed the Nets to open the fourth with a 10-0 run that gave them a 73-60 lead with seven minutes to go.

Robert Covington had 20 points for the 76ers, an NBA-worst 2-20. Michael Carter-Williams (photo above) added 14 points and nine assists.

Overall, the Sixers shot just 31.9 percent — the lowest percentage a Nets opponent has posted in more than eight years — while going an abysmal 9-for-33 on shots in the paint and setting a shot-clock-era record by making only 11 2-point field goals in the game.

“Going 9-for-33 in the paint is hard to do,” Sixers coach Brett Brown said, perfectly encapsulating Philly’s second half.

The Nets, meanwhile, got balanced contributions from across their roster, something they needed with Brook Lopez (back) and Mirza Teletovic (hip pointer) sidelined once again, and Johnson still recovering from the flu.

Along with Plumlee’s double-double, the Nets also got 11 points from Sergey Karasev, who started his second straight game, while Bojan Bogdanovic — the man Karasev replaced in the starting five — scored nine, Alan Anderson had 12 points and five rebounds and rookie Cory Jefferson had six points and seven rebounds.

“Our guys stepped up,” said Deron Williams, who missed all eight shots from the field and scored just three points, but had 10 assists, four rebounds, three steals and only two turnovers.

“I thought [Mason] did a great job of filling in the starting lineup, I thought Cory gave us huge minutes, [Alan] played good off the bench … we needed guys like that to step up.”