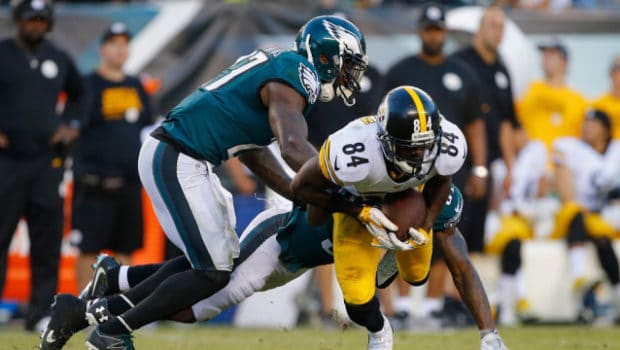 AGAINST EAGLES, COLOR OF STEELER BROWN’S SHOES WAS NFL ISSUE!

If you don’t think the NFL is the most anally retentive professional sports league in the world, check this out:

Steelers wide receiver Antonio Brown changed out of his yellow and blue shoes at halftime of last week’s loss to the Eagles, but not by choice.

On his weekly Pittsburgh radio show last night, Brown confirmed that game officials gave him a choice: Change his shoes or stay in the locker room.

Brown changed his shoes for the second half. His yellow and blue shoes were an NFL uniform violation.

When Brown was fined for his blue shoes and his touchdown dance in the season opener, he said the fines were “nothing to a boss.” But the boss wanted to keep playing, so he changed his shoes last Sunday.

He can expect another fine this week.