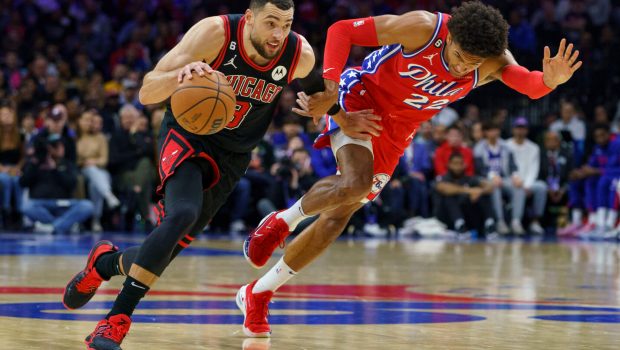 LaVine made three 3-pointers in less than a minute and a half to give Chicago an 88-74 lead with 3:33 left in the third quarter. He was two short of his career high for 3-pointers.

“He got hot, we couldn’t find him, we started trapping him and everybody else got easy opportunities because he was making shots,” 76ers point guard James Harden said. “Just one of those games.”

Vucevic took advantage of Philadelphia’s undersized center tandem of PJ Tucker and Montrezl Harrell with Joel Embiid missing his second straight game because of soreness in his left foot.

“Obviously, with Joel (Embiid) we’re a different team. But we don’t have him, so we have to find a way to win that game tonight,” 76ers coach Doc Rivers said. “Give them credit, they shot the heck out of the ball.”

Tyrese Maxey had 26 points and six assists for the 76ers, his best performance since returning to the lineup on Dec. 30. Maxey averaged 12.7 points and shot 37.5% from the field in his previous three games since returning from a fractured foot that sidelined him six weeks.

Chicago had a 28-11 run to finish the second quarter and erase a 13-point Philadelphia lead.