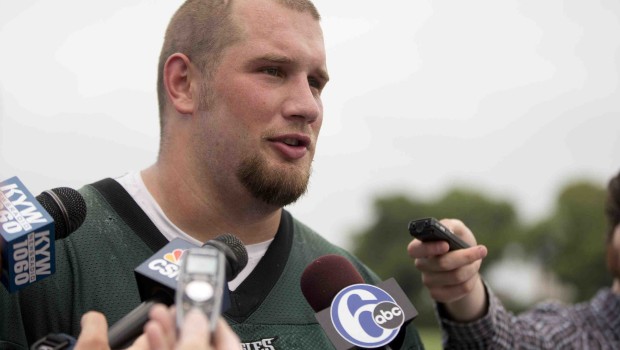 AFTER OTA'S, CHIP RIFFS ON NEW BIRDS AND MORE

“Now Lane [Johnson, photo above] knows what to do and he’s communicating a little bit better with those guys.”

On free agent safety Malcolm Jenkins: “He’s been outstanding and I said that the last time I talked to you guys. His ability, because he’s played multiple positions in this league, he’s been a corner, he’s been a safety. Rob Ryan, I have a ton of respect for, runs a pretty sophisticated defense in New Orleans, and I think his ability to transition from that to ours, there are some similarities in terms of what we are doing. He’s become the vocal leader on the back end for us, so we are excited to see where he’s going.”

On quarterback Nick Foles: “I just think Nick is more comfortable with the situation and obviously being in his second year you would anticipate that. but I think now, he’s not wondering what’s next. He knows what’s expected during the offseason program during Phase 1, during Phase 2, when you get into the OTAs and when you get into minicamps; so he can help the younger players. That’s one thing Nick is really good at is taking the young guys. Right now he’s been taking the young guys under his wing and showing them, this is how we do this, this is how we approach this. He’s done the same thing with Mark (Sanchez), this is how we want it to look, this is the vision we want to have for what this thing is supposed to look like, and he can articulate that really well. And what he did last year from a performance standpoint, people are going to listen to him. ”

On kicker Alex Henery:“Yeah, I think he’s gotten a little bit stronger in terms of the distance he’s kicking the ball and in terms of where we are placing the ball during kickoff drill. Excited to see where it is, especially when we get into some real live situations. The tough thing with the kickers is we can’t rush them, we can’t do anything. A lot of times right now it’s like they are going out on the driving range and hitting balls. It’s not real live action for them. Again it’s another position where we won’t have anything determined until we get into preseason camp and get into some preseason games.”

On tackle Lane Johnson: “He’s different. Obviously he’s not a first-year player and he’s not relying on (guard) Todd Herremans to make the call for him. Similar to Mychal Kendricks, I think sometimes Mychal leaned on DeMeco (Ryans) and didn’t make the decisions himself. Last year a lot, Lane made decisions with Todd Herremans. And Todd just told me what to do and executed. Now Lane knows what to do and he’s communicating a little bit better with those guys.”