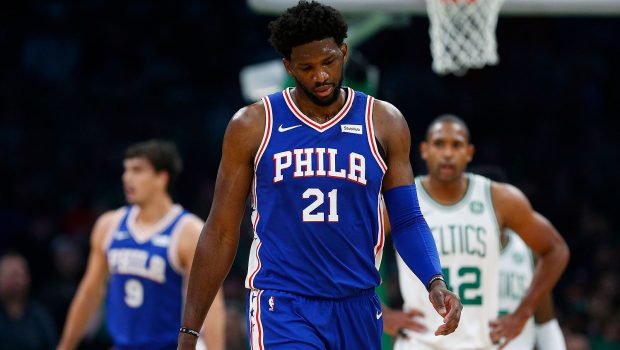 AFTER OPENING NIGHTMARE, SIXERS ARE HOME WITH THE BULLS!

In case you hadn’t noticed, the Sixers’ season opener in Boston the other night was a nightmare.

For Simmons, that means his free-throw shooting, as he went 5 of 11 from the line. For the rest of the Sixers, that means their 3-point shooting (19.2 percent as a team) and turnovers (16 as a team).

“It was our first game but there are no excuses,” said center Joel Embiid (above), who had 23 points on 9-of-21 shooting and added 10 rebounds. “We did not execute offensively…. We did not move the ball at all. We had a few games and a lot of practices to work on what we were supposed to do and we didn’t do it.”

“The challenge for us is to make sure we stay together through the good times and the bad,” head coach Fred Hoiberg told reporters. “There’s going to be a time — I can pretty much promise you (Thursday) — we’re going to hit some adversity. You’ve got to find a way to battle through it.”

Already facing adversity this season is Jabari Parker, the No. 2 overall pick in the 2014 draft who signed a two-year, $40-million deal with his hometown Bulls during the offseason.

Hoiberg announced that Parker would not begin the season in the starting lineup, as power forward Bobby Portis earned a starting nod. Even with budding star Lauri Markkanen and his scoring prowess out until at least late-November with an elbow injury, Hoiberg did not feel Parker’s scoring punch was more important than Portis’ contributions.

“The way we went out early in games and competed, I like the way (the lineup) looked,” Hoiberg said. “We felt Bobby gave us a great start. And we got Jabari going a little bit in that last game, running some different things with him as the facilitator.”

The 76ers are coming off a night in which 2017 No. 1 overall pick Markelle Fultz had just five points on 2-of-7 shooting, while J.J. Redick had 16 off the bench. So they could be looking at some lineup changes themselves if the Game 1 loss leads to more defeats.

“It was a very disjointed game for the first game,” Sixers head coach Brett Brown said. “I give Boston credit, they forced a lot of that. We had an off night for sure. but we’re excited to go back to Philadelphia and incrementally grow this.”