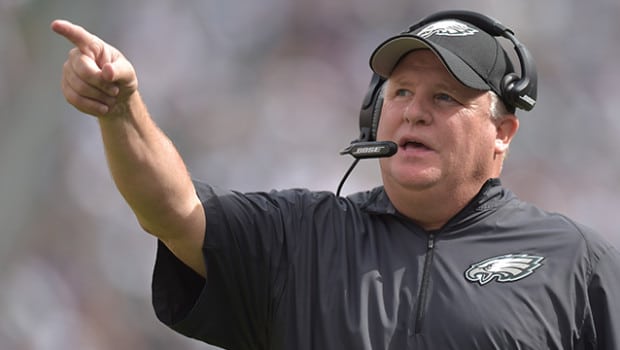 AFTER EAGLES’ 1ST WIN, SOME RATIONAL PERSPECTIVE ON CHIPPER!

As the lame-ass Philly media keep up the drumbeat that Eagles coach Chip Kelly is in way over his head in the pros and is dying to go back to college, here is what ESPN thinks:

One running back he signed, Ryan Mathews, rushed for 108 yards and caught a 23-yard touchdown pass. The all-purpose back he traded for and extended last year, Darren Sproles, scored two touchdowns, including one on an 89-yard punt return.

“I saw nothing but green grass,” Sproles said.

His coach saw nothing but blue skies.

Nobody was asking Kelly about DeMarco Murray, the inactive replacement for the not-so-dearly departed LeSean McCoy, who managed a grand sum of 11 yards on 21 carries in the losses to Atlanta and Dallas. Nobody was asking Kelly about the offseason departures of his starting guards and his perceived neglect of an offensive line that kept Sam Bradford protected against all those big Jets bodies up front.

Nobody was even asking the winning coach much about Bradford, the quarterback with Joe Namath knees who looked so dreadful in Weeks 1 and 2. Bradford didn’t accomplish much at all, and yet somehow, some way, Kelly left the building with a 1-2 record, which is almost as good as a 3-0 in the oil spill that is the NFC East.