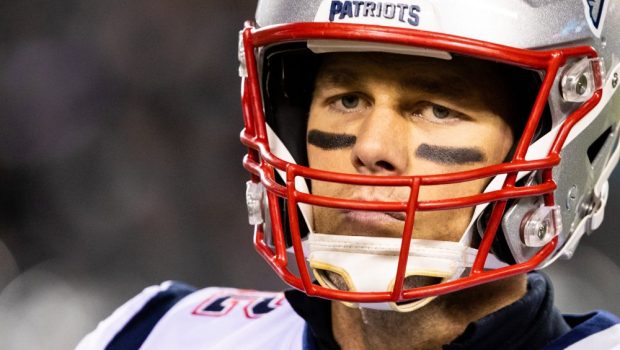 AFTER BEATING EAGLES, PATS TOM BRADY SOUNDS LIKE THE LOSER!

Tom Brady had an average game yesterday as his Patriots beat the Eagles 17-10.

Pedestrian numbers for sure.

But his team won.

So what was up with Brady’s sullen post-game demeanor?

Judging by his body language and his monosyllabic responses after the game, you would have sworn the New England Patriots had lost to the Eagles in the Super Bowl all over again.

New England did beat the Birds in the teams’ first meeting since Super Bowl LII, surviving a 17-10 defensive battle. But the victory offered no vindication for Brady.

The usually ultra-reserved Bill Belichick had allowed himself to enjoy the victory. He gushed over his defense’s performance and praised special teams contributors. He even cracked half a smile and joked trainers would probably have to ice and massage the throwing arm of wide receiver Julian Edelman after his third-quarter, 15-yard pass to fellow wideout Phillip Dorsett, which represented New England’s only touchdown of the game.

But, according to USA Today, nine questions during 1:56 at the podium were all Brady could stomach. A feeble offensive performance – 31% success rate on third downs, a 1-for-3 showing in the red zone and only 298 total yards – was weighing on Brady.

Asked about his surly demeanor, Brady did his best to play it off.

“Well, we just played for three hours. So I think everyone is a little tired,” he said.

Brady drew no consolation from the fact that the Eagles boast a talented defense. He knew that had it not been for New England’s own dominant defense, the Patriots very well could have lost handily.

“Up and down. That’s what it looks like to me,” is all he could offer. “We could probably do everything better.”

Brady might have wanted to lament that it’s clear the Patriots’ offense is struggling from a deficiency of game-changing talent at the wide receiver and tight end positions. He might have wanted to fume over the fact he’s having to hold the ball longer while waiting for receivers to get open and, in so doing, he’s subjecting himself to further risk of sacks and injuries. The job has gotten harder in Year 20, as Brady is now working with less.

For years, Brady relied heavily on four-time All-Pro Rob Gronkowski, who paired with Edelman to give Brady two top-flight weapons. The quarterback could throw the ball up anywhere in Gronk’s general direction, and the mammoth tight end would come down with the catch more times than not.

But now, outside of Edelman, the Patriots don’t have pass catchers capable of consistently winning one-on-one matchups, and their offense is struggling as a result.

By now, the Patriots had hoped to have filled that Gronk-sized void.

Josh Gordon was supposed to help this season, but he never carved out a featured role in New England’s offense before getting released last month. Antonio Brown was also supposed to help in this regard, but the mercurial wideout played in only one game for New England before he was cut.

The team spent a first-round pick on N’Keal Harry, but an ankle injury sidelined him for the first 10 weeks of the season. His debut on Sunday featured modest numbers: three catches, 18 yards, no touchdowns. Benjamin Watson has taken over at tight end, but he’s not at all the unstoppable force that Gronk was.

The Patriots traded for Mohamed Sanu at the deadline, but he too is still in the acclimation stages. He recorded 10 catches for 81 yards and a touchdown in Week 9 against the Ravens. But he certainly wasn’t much of an X factor on Sunday with just two catches for 4 yards and a carry for 8 yards.

Edelman, of course, remains. But it’s easier for opponents to focus on containing him when no one else on the offense scares them. And there were plenty of times on Sunday when Edelman did indeed get open only to have Brady’s passes miss their marks. Against Philly, Brady targeted Edelman 10 times, but the pair managed only five completions for 53 yards.

So here Brady and the Patriots find themselves: 10 games in, six left to go, and no closer to finding a solution than they were in Week 1.

The only saving grace is a defense that continues to hold foes to the fewest total in the league while boasting a season-best 28 takeaways. With a backing like that, New England always has a chance for the remainder of the regular season.

They’ll likely need more in the postseason. Short of a miracle in the form of an overnight Harry maturation into a Pro Bowl-caliber threat or a Gronkowski comeback, there are no obvious quick fixes forthcoming.

Perhaps that’s why Brady appeared to be so dejected after the game.

On the next-to-last question of the news conference, a reporter asked him about his level of concern with the offense and whether he thinks things will eventually work themselves out. There wasn’t exactly a flicker of hope in his eyes.

“I don’t think it matters what I think. It matters what we do,” he said, determined to say nothing further, perhaps to avoid revealing any doubts.

Then someone asked a tongue-in-cheek question about Edelman’s perfect passer rating of 158.3, which on Sunday night dwarfed Brady’s own of 67.3.

Brady did his best to force a smile, but it instantly vanished.

“It was a good throw. So, thank you, guys,” he said and quickly retreated to the locker room.