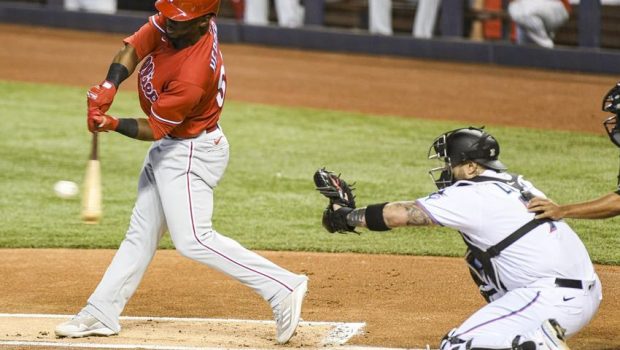 Which is sort of poetic because the entire season had been a mix of sugar highs and realistic lows.

Nick Fortes hit a tiebreaking two-run home run in the fourth inning, and the Marlins beat the Phils 5-4.

Bryce Harper doubled and walked before being replaced in the bottom of the third. A contender for NL MVP, he hit .309 with 35 homers, 84 RBI and a major league-best 1.044 OPS.

Fortes sent a drive off off Hector Neris (4-7) into the Marlins’ bullpen in left for a 5-3 lead, his fourth home run since he was called ip from Triple-A on Sept. 17.

The Phils finished 82-8, their first winning season since last reaching the playoffs in 2011. The fallout of another postseason absence resulted in the firings of hitting coach Joe Dillon and infield coach Juan Castro, manager Joe Girardi said Sunday.

“It’s been a tough day, sometimes the season doesn’t go the way you want and people are let go,” Girardi added. “The difficult part is you know how hard they work at it and they’re friends. At this level it’s a production-based business. It’s difficult.”

Zach Thompson (3-7) pitched a scoreless fourth. Three relievers kept the Phillies scoreless before Anthony Bender allowed Brad Miller’s RBI single in the eighth. Dylan Floro closed with a perfect ninth for his 15th save in 21 chances.

Freddy Galvis hit a solo homer and Andrew McCutchen added a two-run drive for the Phillies.

With Miami out of contention and Sunday’s game not having playoff implications, manager Don Mattingly allowed shortstop Miguel Rojas to run the club. Rojas also had a one-day managerial stint in the final game of 2019.

“The guys made it easy on me, everybody did their jobs,” Rojas said. “It’s always nice to see the game from a different perspective. Overall, I’m happy and proud the way they played today.”

Marlins starter Pablo López returned from a right rotator cuff strain to make his first appearance since July 11. Limited to 1 2/3 innings and 42 pitches, Lopez gave up one run, four hits, struck out four and walked one.