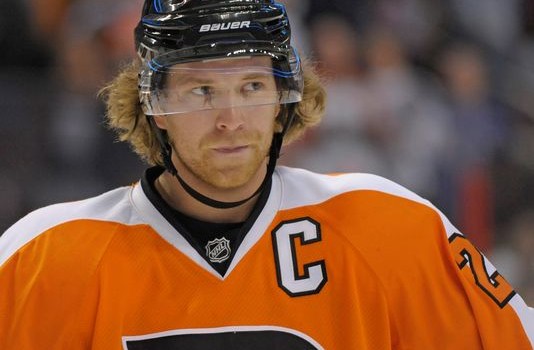 AFTER A QUIET SUMMER, THE FLYERS ARE PROBABLY TWO YEARS AWAY

You know your favorite hockey team is having a quiet summer when the biggest news they want you to know is that three of their legends — Eric Lindros, John LeClair and Eric Desjardins — are being inducted into the team’s hall of fame.

To be fair, they re-signed back-up goalie Ray Emery on July 1 and later
added veteran defenseman Nick Schultz, who was traded from Edmonton to
Columbus last year at the trade deadline and re-upped forward Brayden
Schenn. Before July 1, they also traded Scott Hartnell to the Blue
Jackets for R.J. Umberger and re-signed 39-year-old defenseman Kimmo
Timonen.

Still, while other rivals in the division and Eastern Conference
improved on the first day of free agency, the Flyers barely moved.

The Penguins still have Sidney Crosby and Evgeni Malkin and simply
retooled after a great regular season but poor postseason. They will
remain the team to beat in the Metro.

The Rangers, fresh off their first Stanley Cup appearance since 1994,
used an amnesty buyout on Brad Richards and lost a handful of key role
players, but they return a dangerously deep team headed by standout
goalie Henrik Lundqvist that has the tools to play well into June again.

The Capitals and Devils, two teams that went down to the wire but fell
short of the playoffs, will surely be better — and Columbus continues to
move up the ranks.

Despite remaining mostly quiet in the offseason, the Flyers should
contend for a playoff spot again with the Capitals, Devils and Blue
Jackets — and likely take it down to the final weeks of the season again
before clinching a berth.

As for developing into serious Stanley Cup contenders, they are probably
at least two years away and maybe more. That is the minimum amount of
time it should take for their highly-touted defensive prospects to
become NHL staples.

The Flyers are hoping Shane Gotisbehere and Robert Hagg, who are both
headed for a season with the Phantoms, will develop into the top
puck-carrying defenseman the current squad is mostly void of while 2013
first round pick Sam Morin, who is probably ticketed back to juniors,
turns into the next Chris Pronger.

For now and at least this season, the Flyers and coach Craig Berube need
to figure out how to keep winning with a lumbering defense that is led
by the aging Timonen. Braydon Coburn, Luke Schenn and Nick Grossmann are all scheduled to be free agents after the 2015-2016 season, which is
when the prospects will no doubt either be knocking on the door for a
starting job or already have one.

The good news is the core of the team, which includes most of their
young forwards, ranges from 21 years old (Sean Couturier) to 26 (captain
Claude Giroux, who was a finalist for MVP). In three years those
players will be in their prime and if the young defensemen develop as
hoped and are surrounded by key veterans on the blue line, the Flyers
may inch up into the Cup contender category.

That process could start this season. Scott Laughton, the team’s 2012
first round pick and just 20 years old, is expected to challenge for a
roster spot in September as will Jason Akeson (24), who joined the
Flyers late last season and played in every playoff game.

The one area that is secure, ironically, is in goal.

For the first time since their current GM manned the pipes more than 20
years ago, they are set in net with Steve Mason. The 26-year-old
netminder emerged as a bona fide No. 1 last winter and nearly stole
their first-round series against the Rangers.

Anchored by Mason, led by a deep offense that returns six 20-goal
scorers and an average defense which is supported by the forwards under
Berube’s team-defensive system, it’s hard not to fathom them battling
the Rangers, Capitals, Devils and Blue Jackets for a playoff berth.