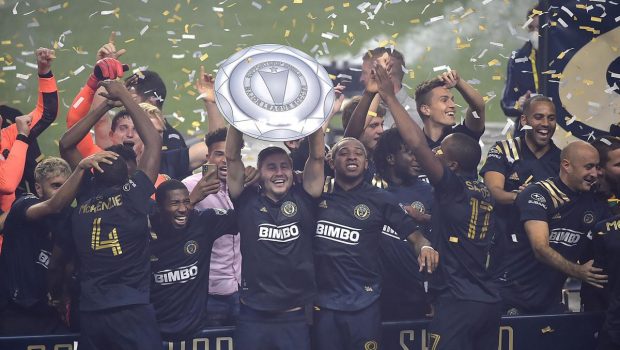 AFTER A DECADE, UNION IS BEST IN MLS AS THE PLAYOFFS BEGIN!

Goals by Sergio Santos and Cory Burke gave the Union a 2-0 win over the New England Revolution and their first Supporters’ Shield, the symbol of MLS primacy.

The Union’s 2-1 loss to the Columbus Crew last weekend left them in a tie with Toronto FC for the prize heading into yesterday’s Decision Day.

But Toronto fell 2-1 to the Red Bulls, and Philly (14-4-5) finished with 47 points to claim the top spot in the Eastern Conference and home-field advantage through the playoffs.

“The boys put a lot of work into this season and then obviously today to win it on our home field in front of our fans is special. The club’s first trophy — which is always the hardest one to get,” Philadelphia coach Jim Curtain said.

The Union will wait for the results of the play-in matches to learn their first opponent in the playoffs.

Yesterday’s game was at Subaru Park, where the Union are 9-0-0 during the regular season.

New England (8-7-8) will face Montreal in the play-in round.

Philadelphia took a 1-0 lead into the break after Santos scored on a shot that rebounded off the crossbar and landed at his feet in the 42nd minute. Burke added a goal for the Union in the 69th minute.

The Union had already clinched a spot in the CONCACAF Champions League. Toronto was only eligible to secure a spot by winning the Canadian Championship.