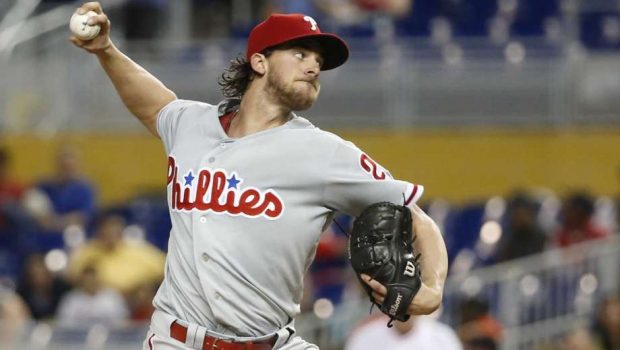 Because an ace is the pitcher who puts a stop to the bleeding, which is what the Phils have been doing lately.

He was uneven early last night in Miami.

But he regained his mojo, and allowed four hits in 7 1/3 innings to lead the Phillies to a 6-0 victory over the Marlins.

Nola (4-1) walked one and struck out seven to help the Phillies snap a season-high, four-game losing streak.

“He was pretty dominant throughout the whole game, not a lot of stress,” Phillies left fielder Rhys Hoskins said. “You need that from your guys at the top of the rotation. He stopped the bleeding. Noles was Noles and we needed it.”

He retired 17 consecutive batters at one point.

“I was just trying to get early contact,” Nola said. “I know they’re going to swing if I’m around the zone. My changeup worked pretty well tonight.”

Nola allowed two baserunners in each of the first two innings before not allowing another until Lewis Brinson’s single in the eighth ended his outing.

“It’s really fun when it’s like that, a pitcher that makes the adjustment so quick and just hits the spot all of the time,” Phillies catcher Jorge Alfaro said. “It’s so fun.”

Cesar Hernandez led off the game with a home run and Maikel Franco had two doubles and drove in a run for the Phillies.

“Jose threw the ball good,” Marlins manager Don Mattingly said. “The first guy leads off with a homer, but that really didn’t bother me.”

The Marlins’ J.T. Realmuto extended his hitting streak to 11 games, tying a career high, with a single in the first inning. He is hitting .327 (17 for 52) over that span.

The Phillies led 2-0 in the second on a throwing error by Urena.

“Tried to make a nice and easy throw, the ball flew,” Urena said.

Franco drove in a run on a double and scored on a groundout by Pedro Florimon to push Philadelphia’s lead to 4-0 in the eighth.

The Phillies added two runs in the ninth to cap the scoring.