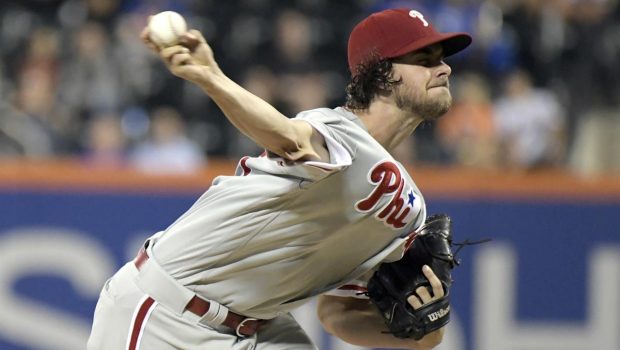 The Phillies are hanging tough in their race to catch the Braves for the National League East title.

First, they did their part when Rhys Hoskins hit a homer in the eighth, making a winner of Aaron Nola, as they .

Carlos Santana lined an early two-run shot for the Phillies, who are now just two and a half-games behind Atlanta, which lost in Arizona.

Nola (16-4) struck out eight batters over seven innings, matching Washington ace Max Scherzer for the N.L. lead in wins. The two are in a tight race with the Mets star Jacob deGrom for the N.L. Cy Young Award, and Nola helped his cause.

Nola walked one and gave up three hits, including Dominic Smith’s tying homer in the seventh inning. Hoskins connected on a 97-mile-per-hour fastball from Tyler Bashlor (0-3), leading off the eighth for his 28th home run.

Seranthony Dominguez worked a perfect inning, and Tommy Hunter got three straight outs for his fourth save as the Phils’ bullpen made quick work of the Mets.

Jay Bruce flied out to the center-field fence in the ninth.

Bruce homered leading off the second, and the rookie Jeff McNeil drove in a run with a hit-and-run double for the Mets. Nola, however, improved to 4-0 against the Mets this year.

Asdrubal Cabrera put the Phillies up, 3-2, with a run-scoring single off reliever Eric Hanhold in the sixth. Pinch-hitter Odubel Herrera opened the inning with a double.

Before the game, the veteran infielder Cabrera doffed his cap to the crowd when the Mets played a video tribute for him. The Mets traded him to Philly in late July.