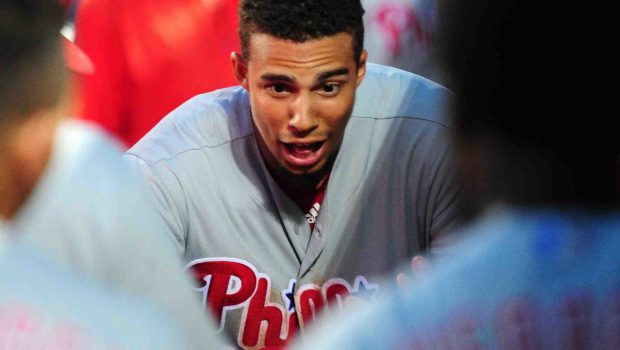 AARON ALTHEER GIVES THE PHILLIES A MUCH-NEEDED SHOT IN ARM

That was quite a 2016 debut for Aaron Altherr!

The team activated Altherr from the 60-day disabled list before the 7-5 victory over the Braves at Turner Field. He hit fifth and went 3-for-4 with a two-run home run, giving him a nice start in what is expected to be an important audition over the Phillies’ final 58 games.

“Definitely,” said Altherr, asked if it was the perfect season debut. “Especially sitting around thinking about how that first game’s going to be being back. For it to be like that, it was definitely special.”

Altherr opened spring training as a projected everyday outfielder, but he tore a tendon in his left wrist in March, which required surgery. After a lengthy recovery spent mostly in Clearwater, Fla., Altherr rejoined the Phillies ready to prove he should be part of the Phillies’ future plans in the outfield.

Cody Asche and Rule 5 Draft pick Tyler Goeddel will continue to play in left field, although Asche continues to receive the bulk of the playing time. He has started 42 of the last 51 games in left field, but he has hit .094 (5-for-53) in his last 17 games.

“As I said earlier in the season, this is a very big year for Cody to prove that he can be part of the future and he needs to step it up,” Mackanin said. “Goeddel needs to play. I need to play Goeddel. I have to come to a conclusion so I can speak intelligently at the end of the year about what I think, if Cody fits in, if Goeddel fits in, if [Jimmy] Paredes fits in. But Asche and Goeddel, we have to know. I don’t want to go into spring training next year wondering.

“After two or three years of opportunities that should give you a pretty good indication whether a guy fits or not. However, there’s two months left in the season and anything can happen. So I’m not discounting anybody.”