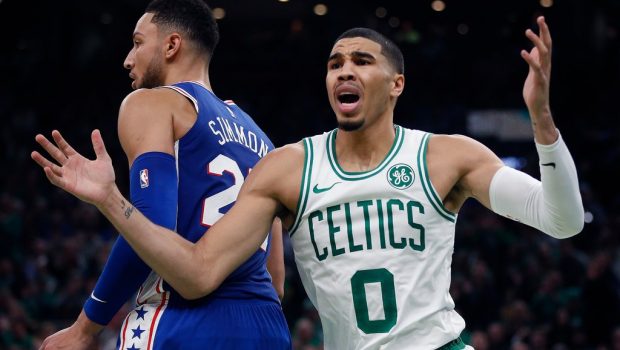 You could have closed your eyes and imagined last night’s season opener between the Sixers and the Celtics had been played last May in the second round of the playoffs.

That’s how similar the script and the results were.

But the Celtics’ struggles didn’t dampen the mood inside TD Garden for the return to regular-season action for Gordon Hayward and Kyrie Irving.

Hayward said it was “amazing” to be back out there.

The Celtics survived a lethargic start and rough shooting night but rallied to lead by as many as 18 in the second half.

Including the playoffs, Boston has won 10 straight games at home over Philly, which it defeated in the Eastern Conference semifinals last season.

Embiid made it clear afterward the 76ers have a way to go to be on the Celtics’ level.

Hayward played in his first game since undergoing surgery and more than 10 months of rehabilitation for the gruesome left ankle injury he suffered five minutes into last year’s season opener.

He received an extended ovation from the home crowd during a pregame introduction that included a video montage of his rehab process.

Irving was also back following a pair of surgeries on his left knee that caused him to miss the end of the regular season and playoffs.

After receiving loud ovations during pregame introductions, Irving and Hayward both had sluggish starts.

Hayward missed his first four shots before making back-to-back jumpers. Irving missed his first nine attempts from the field. He didn’t score until finally connecting on a pair of free throws early in the third quarter.

They shot a combined 6 for 26 for the game. Hayward finished with 10 points and five rebounds in 25 minutes. Irving had seven points and seven assists.

The Celtics missed seven of their first 10 shots and the Sixers started just 4 for 11. The Sixers also committed 11 first-half turnovers that led to 10 Celtics’ points.

“If we can guard like that, we’ve got a chance to be decent,” he said.