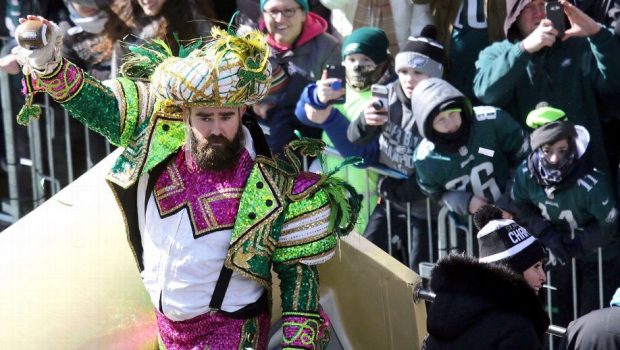 It was a year ago tonight that the Eagles shocked the world — but not their fans — by beating the 4 1/2-point spread and the Patriots 41-33 to win their first Super Bowl and their first NFL title since 1960!

You only had to watch last night’s snooze-fest to further appreciate the game that the Birds and Pats put together a year ago in Minny.

The parade on Feb. 8 seems as if it occurred yesterday, and Jason Kelce’s (above) five-minute F-bomb-filled tribute to the fans will last forever!

The party, in many ways, is still going strong.

Cheers still break out when Alshon Jeffery elevates for a touchdown grab or when Nick Foles sprints into the flat awaiting a throw from Trey Burton.

As ESPN has pointed out, the idea that there was a “Super Bowl baby boom” in Philly isn’t supported by data from two of the city’s biggest hospitals.

During the weekends of the two home playoff games and the Super Bowl, Philly hotels achieved the following, according to Philadelphia Convention and Visitors Bureau director of communications Alethia Calbeck:

A 15 percent sales increase, with an additional 12,500 rooms sold versus the same time the previous year.

More than $3 million in incremental hotel room revenue generated versus the same time the previous year.

There were other events happening during this time to drive demand, Calbeck noted, but the majority of growth occurred on game days.

Philly had a record-breaking year overall in the hospitality industry, as Center City hotels achieved record occupancy (79.6 percent) and increases in average daily rate (up 3 percent from 2017) and revenue (up 9 percent from 2017).

“I don’t think we can correlate it directly to a Super Bowl win (smile), but it could be a contributing factor, given the heightened national and international media attention our Eagles received,” wrote Deana Gamble from Mayor Jim Kenney’s office.