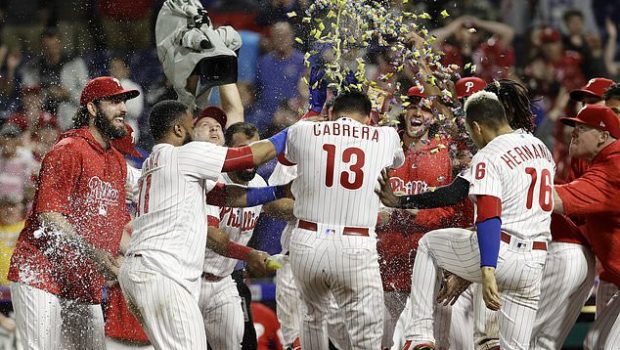 A WALK-OFF TO GROW ON! PHILS END AWFUL AUGUST WITH A PARTY!

“That’s why we traded for him,” Phillies manager Gabe Kapler said of Asdrubal Cabrera, who came from the New York Mets on July 31. “Big moment. Absolutely demolished the ball.”

Asdrubal Cabrera Cabrera’s solo home run with one out in the 10th lifted the Phillies to a 2-1 victory over the Chicago Cubs in a game played through steady rain.

Cabrera connected off Steve Cishek (4-2), driving an opposite-field shot to left-center to help the Phillies pull within two games of Atlanta in the NL East. The Braves lost 3-2 to Pittsburgh.

Cabrera was mobbed by teammates after circling the bases following his fifth career walk-off homer and first since hitting one off teammate Edubray Ramos on Sept. 22, 2016.

“It feels awesome to help the team win,” Cabrera said. “This game is not easy.”

Pat Neshek (2-1) earned the win with a scoreless inning.

Baez hit a liner out to left off Nick Pivetta for his NL-leading 98th RBI to give the Cubs a 1-0 lead in the fifth.

The Phils tied it at 1 on Cesar Hernandez’s RBI single off Jose Quintana in the sixth. The speedy Roman Quinn hit a double and scored on the hit to left.

Phillies reliever Adam Morgan escaped a jam in the seventh when Baez hit a hard liner to right with two runners on, but Phillies newcomer Jose Bautista reached out to make the catch and doubled Tommy La Stella off second to end the inning.

Seranthony Dominguez struck out Cubs pinch-hitter Victor Caratini to leave the bases loaded in the eighth.

Pivetta pitched out of a bases-loaded, one-out situation in the third by striking out Anthony Rizzo and retiring Ben Zobrist on a grounder to shortstop.