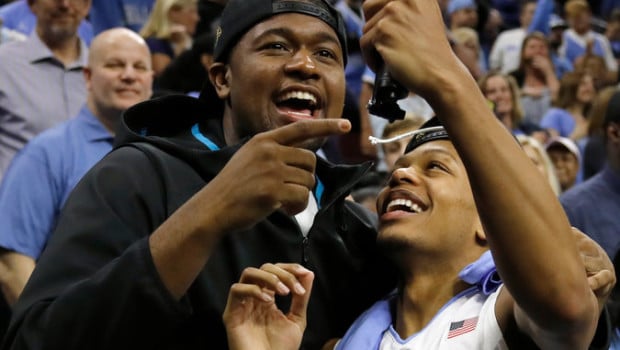 That’s because they are brothers!

Britt and Jenkins, both juniors, grew up as siblings in Maryland, tracing nearly identical basketball pathways to an intersection on the college game’s biggest stage.

Their connection is so tight that Jenkins attended North Carolina’s game against Notre Dame in the East Regional final, seated directly behind the Tar Heels’ bench. The brothers embraced and took selfies on the court after Carolina’s win.

“It was a special moment,” Jenkins said. “I told him how proud I was of him. And that we need to keep it going so we could get to the point we’re at now.”

Now that they are here, the two players have not spoken since Carolina’s game ended Saturday night.

“I was a Carolina fan,” Jenkins said, “until last night.”

Oddly, each player could have wound up at the opposite program. Britt was recruited early by Villanova.

“When we met with Nate, we met with Kris,” Villanova coach Jay Wright said. “As the recruiting went on, Nate Britt Sr. said Kris loved it. If he loved that, we want this guy.”

Carolina Coach Roy Williams said the team surely would have been interested in Jenkins if Britt had not already committed to the Tar Heels.

“I thought he was going to be a big-time college player,” Williams said.

Having two basketball prodigies in the household was not always easy.

“Kris was always looked at as the better player, and I didn’t like that,” Britt said. “We were always competing.”

The Britts first met Jenkins and his mother, Felicia, at an AAU tournament in Florida in 2004, where Jenkins and Britt established a close friendship. Three years later, Felicia Jenkins was the head women’s basketball coach at a Division II college in South Carolina but asked the Britt family if they could take Kris Jenkins into their home in Upper Marlboro, Md.

“I’m really blessed and fortunate to have two families,” Jenkins said. “I really do. I owe them everything. They don’t look at it that way, but that’s how I look at it.”