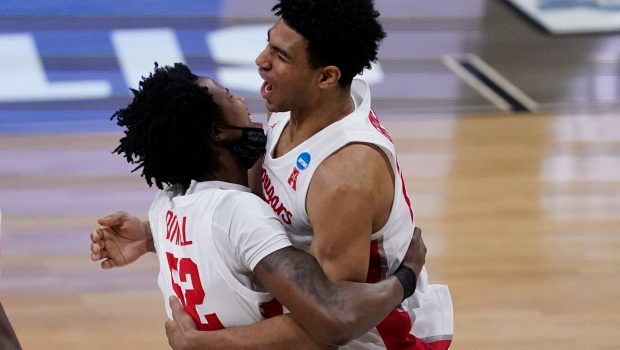 Houston dashed the Final 4 dreams of No. 12 seed Oregon State with a 67-61 victory in the Midwest regional final, and the No. 2-seeded Cougars will play Baylor, which beat Arkansas, 81-72.

Baylor, a top seed, jumped to an early 18-point lead on 3-point shooting and fended off the resilient Razorbacks down the stretch, clinching its first Final Four appearance since 1950.

The Cougars, who are in the Final Four for the time since 1984, blew a 17-point halftime lead but Quentin Grimes steadied them, hitting a 3-pointer from the top of the arc with 3 minutes, 21 seconds left, putting Houston ahead to stay.

“One thing you have to remind people, young men in these situations — don’t be afraid to fail,” Coach Kelvin Sampson said, recalling what he told his team during a timeout after Oregon State had tied the score. “Don’t be afraid to miss the shot. You certainly can’t be afraid to take it.”

The Cougars (28-3), who rallied from a 10-point, second-half deficit to beat No. 10-seeded Rutgers in the second round, have navigated a wrecked bracket, facing the 15th, 10th, 11th and 12th seeds. Their latest opponent, Oregon State (20-13), was trying to become the lowest seed to reach the Final Four.