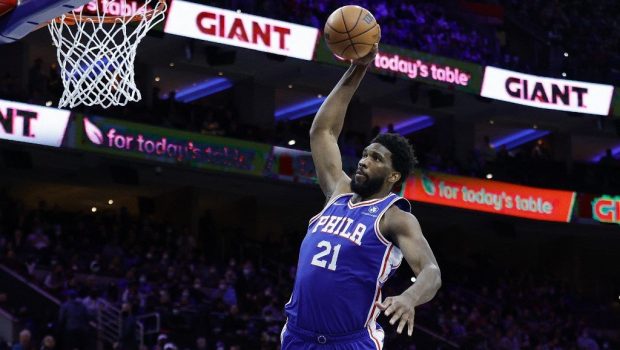 So, maybe his comments post-game should be considered in that context.

But he basically pissed on the notion that the Sixers are dying to trade crybaby Ben Simmons for another piece to their 2021-22 puzzle.

Embiid said “there’s really no urgency to change anything” with his team with just under four weeks to go until the NBA’s trade deadline.

“I feel great, man,” Embiid said after the Sixers 111-99 victory over their despised rivals.

“When I look at where we are when we got most of the team in the lineup, especially me in the lineup, then we are 21 and 9. That’s not bad. That’s up there with the best records in the NBA. So, all that tells me is that we just got to stay healthy, keep doing what we’ve been doing.

“I feel pretty good, and I don’t think we’ve played our best basketball yet. We still got a long way to go. We’re missing guys here and there that could really help us. There’s really no urgency to change anything. I think we got everything we need. We’re gonna keep on going and I’m happy.”

The 76ers have played this entire season with All-Star guard Simmons sitting out, as his ongoing trade demand goes unfulfilled. Still, when Embiid has been on the court, Philadelphia has won 70% of its games and has outscored its opponents by 6.9 points per 100 possessions.

The possibility of a Simmons trade — and what it could get Philadelphia in return — has loomed over the 76ers all season, however, ever since Simmons refused to report to the start of training camp in September.

But Embiid said he believes the Sixers are good enough to win with the players they have available to them right now — though he admitted that it would require the 76ers to play near-perfect basketball.

“I think so,” he said. “I think we all gotta, we all gotta be our best. And when we are at our best, I think we can beat anybody. We’ve seen it a couple of times this year. So, I just think we need to, I need to keep doing what I’ve been doing and then obviously we need consistency from everybody, not just Tobias [Harris] or Tyrese [Maxey] or Seth [Curry] or Danny [Green], guys coming off the bench, getting Shake [Milton] back [healthy].

“We need consistency, and everybody coming in every single night with the goal of just doing their job and chipping in offensively and defensively and just playing together and we’ll be fine.”

Philadelphia (24-17) was more than fine against Boston (21-22) Friday night, jumping on the Celtics with a 28-2 run in the first quarter and never looking back.

For Boston, it was a quick fall back to earth after some brief sparks of life during a season-long three-game winning streak. But with Marcus Smart out due to the health and safety protocols, the Celtics got nothing from his replacement, Dennis Schroder, who missed all six shots he took in 25 minutes and was called for a flagrant foul 1 for pushing 76ers forward Matisse Thybulle in the back on a dunk attempt.

Thybulle landed very hard on his back, and while he initially stayed in the game, he later left with right shoulder soreness. Before exiting, he had five steals and two blocks for a 76ers team that created 20 turnovers and scored 31 points off them.

“This was a tough night,” said Celtics forward Jayson Tatum, who finished with 20 points, 11 rebounds and 5 assists but had as many made field goals (7-for-17) as turnovers (7). “I don’t think we had any nights like this where … obviously, we’ve had some nights when we’ve started slow, but most of the time, we give ourselves a chance.

“For whatever reason, it was one of those nights where we just started slow and never [recovered].”

For Philadelphia, it was an emphatic bounce-back performance from Wednesday’s loss here to the Charlotte Hornets, a defeat that snapped the 76ers’ seven-game winning streak. Embiid said that Charlotte’s ball movement gave the Sixers a lot of trouble, whereas Boston’s more isolation-heavy offense was easier to guard.

“If you compare, you know, tonight from the other night, it’s kind of easier to guard,” Embiid said. “Charlotte, they move the ball extremely well. They have shooters all over the place, and they made a bunch of jump shots. Obviously, Boston is more of an iso-heavy team. So it kind of becomes easier to kind of load up and try to stop them.”