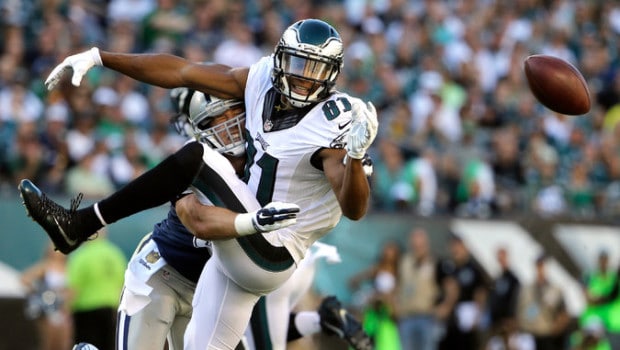 Mike Quick spends Sunday afternoons in the fall next to Merrill Reese doing the Eagles games on radio, but from 1982 to 1990 he was down on the field catching passes from Ron Jaworski and and Randall Cunningham and becoming:

Which is saying a lot considering Tommy McDonald, Terrell Owens and Chris Carter have played here.

And Quick has a great take on the current crop of Eagles wideouts.

After four games, Jordan Matthews (above) leads the receivers with 25 receptions for 281 yards. Rookie Nelson Agholor had a decent game against the Redskins and now has seven receptions for 100 yards. Josh Huff wasn’t targeted at all last Sunday and has four receptions for 39 yards.

“They won’t show it, if they’re not given the opportunity,” Quick said. “They’re getting open. They just have to get opportunities at the right time. Maybe they’re not getting opportunities, because of the break down in the line or the quarterback’s vision, maybe he’s not seeing them come open.”

Matthews has dropped five passes this season, which leads the team. Agholor and Huff have not dropped a pass.

“Josh Huff is the most underutilized player on the team,” Quick said. “To me, he is skilled. We saw it at times last year. We saw it all through training camp. This is a good group of wide receivers.

“They have to put more on them to do, expand what they do in games, not just in practice. There seems to be a lot of emphasis on the guy in the slot. They have to spread it around. When this offense works best, eight different guys are going to catch balls in a game. Not just 81 (Matthews), because teams are focusing on 81.”