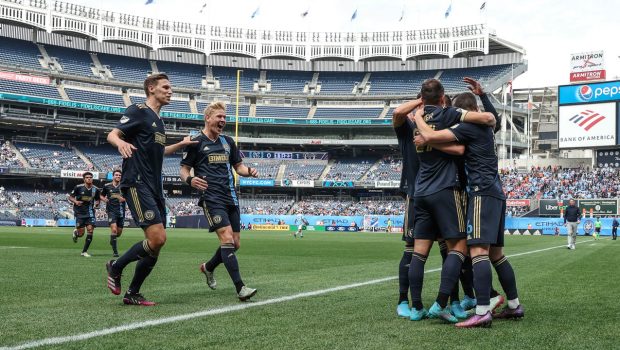 A PERFECT UNION — MEASURE OF REVENGE FROM 2021 PLAYOFFS!

Alejandro Bedoya and Daniel Gazdag scored and the Union stayed unbeaten with a 2-0 victory over New York City FC at Yankee Stadium — their first match-up since NYCFC beat Philly for in the MLS semis last December.

The Union (3-0-1, 10 points) won their third straight game despite holding possession for only 26.6 percent of the match.

Philly took control early in the first meeting between the teams since NYCFC’s 2-1 win last Dec. 5.

The Union were missing 11 players due to a COVID-19 outbreak that prevented Bedoya, goalkeeper Andre Blake and defender Jack Elliott from playing.

NYCFC (1-2-1, 4 points) generated 18 shots but was unable to follow up last week’s impressive 4-1 win over CF Montreal in the home opener and was blanked for the third time in the season’s early going. NYCFC also took the loss after returning from a 4-2 loss to Comunicaciones FC on Tuesday in the CONCACAF Champions League in Guatemala City.

Blake made two saves for his second clean sheet on the season and 52nd career shutout.

In the 11th minute, Philadelphia got a free kick after Leon Flach was fouled by Valentin Castellanos, resulting in a yellow card. Julian Carranza received the free kick and dished to Bedoya, whose right-footed shot from the center of the box went past Johnson into the bottom right corner.

In the 27th minute, Philadelphia nearly lost Elliott to a red card when he took down Santiago Rodriguez near the net. After a video review the red card was rescinded and New York was called for a hand ball before the foul.

Six minutes later, Philadelphia eluded NYCFC’s defense and moved the ball to Nathan Harriel. Harriel then made a cross through the box and Gazdag punched in a left-footed shot from very close range to the bottom left corner for his third goal of the season.

Philadelphia missed taking a 3-0 lead right before halftime when Sergio Santosscored off a corner kick but officials quickly determined Santos was offside.