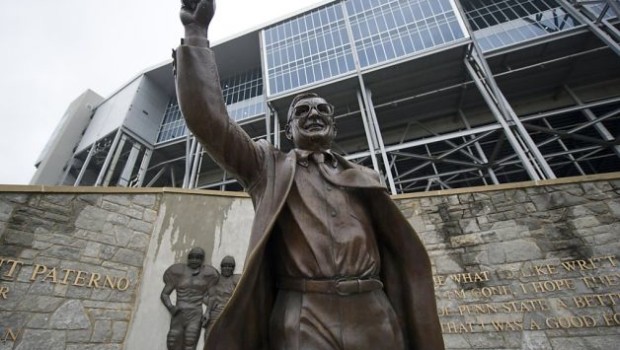 More than three years after the Jerry Sandusky scandal forced the firing of legendary Penn State coach Joe Paterno and the removal of his statue (above), a local political body is neutral on the subject of a new statue.

This might be the first time anyone has registered neutrality on the subject of JoePa.

A planned statue of Paterno set to be constructed by 2015 in State College has had supporters and dissenters sounding off all day. But the State College borough, which didn’t approve the project, says it’s “neutral.”

State College interim planning director Herman Slaybaugh said the proposed location for the planned statue of the late head coach is a unique location, as it’s private property, so technically owners of the area wouldn’t need to seek borough approval for the project.

He also added that builders wouldn’t need a permit to build the statue in the downtown area, as it’s slated to be relatively small and isn’t on public property.

“We didn’t approve this,” Slaybaugh said. “It’s a private venture, and the borough’s neutral.”

The construction of the statue titled “Joe’s Bench,” which is being organized by two State College residents, is set to begin in 2015 and will take place in the Centennial Walkway directly off of State College’s bustling College Avenue. This walkway, which already features a pig statue and an outdoor seating area, falls between the iconic Tavern restaurant and another building that’s home to an art gallery and a clothing store.

Tavern owner Pat Daughterty said he was approached by one of the statue organizers Ted Sebastianelli about the project and said essentially, “why not?”

“If some people don’t agree with that, then they probably don’t come into my restaurant, because Joe Paterno’s picture has been in the lobby of the Tavern since 1966,” Daugherty said, “and there are more than just that picture of Joe in my restaurant. I’ve never had anybody walk into the restaurant and see Joe’s picture and say ‘I’m not going to eat here.’”

The statue project, which will be constructed by Philadelphia-based sculptor Zenos Frudakis, is slated to cost about $300,000. Organizers hope to raise the money necessary through community donations and through funds raised by an affiliated film titled, “The People’s Joe.”

Penn State isn’t involved with the project. The university tore down a statue of Paterno near Beaver Stadium in July 2012 not long after former FBI Director Louis Freeh released his report that implicated Paterno and three other administrators in an alleged coverup of sexual abuse at the hands of former assistant coach Jerry Sandusky.