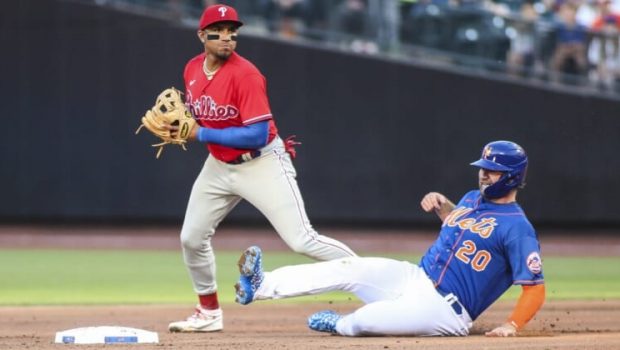 Even when the Phillies live up to their pre-season hype created when they signed Kyle Schwarber and Nick Castellanos, they can’t beat the Mets.

Even after they rallied to lead going into the ninth.

Nick Plummer’s tying homer in the ninth and Eduardo Escobar’s double in the 10th gave the Mets a 5-4 win and a three-game sweep.

Castellanos put the Phils ahead 4-3 with a three-run homer on an 0-2 pitch from reliever Adam Ottavino with two outs in the eighth.

It was Corey Knebel’s third blown save in 11 opportunities, and the Phils wasted a pair of clutch home runs on a 2-5 road trip against the top two teams in the NL East.

“Good teams don’t do that,” slugger Bryce Harper said. “Getting walked off twice in games we should have won. It’s tough. Big homer, big homer and lose. It’s crushing.”

Edwin Díaz (2-1) stranded the automatic runner at second in the 10th. He was aided by a terrific defensive play at third base from Escobar, who reached far over the railing of Philadelphia’s dugout to make a snow-cone catch on a foul pop.

Knebel (1-4) struck out Francisco Lindor to begin the bottom half, and slugger Pete Alonso was intentionally walked. Escobar lined the next pitch into right field to score automatic runner Starling Marte from second and was swarmed by excited teammates in the infield.

“Awesome. It was a crazy win,” Mets starter Chris Bassitt said. “It happens because we believe in it. You get us down a little bit, but we’re just not going to quit.”

It was the third time in the game Alonso was walked — twice intentionally — in front of Escobar, who began the night batting .226 with 12 RBI.

His fifth career walk-off RBI and first since September 2018 gave the NL East leaders their first sweep of the season. They are 12-2-1 in series this year.

Mets setup man Drew Smith dislocated the pinkie on his pitching hand reaching for a comebacker, but New York (32-17) improved to 9-3 against Philadelphia. The division rivals don’t meet again until Aug. 12.

Zack Wheeler settled in after a tough start for the struggling Phillies (21-27), who have lost 10 of 14 and fell 10 1/2 games behind the Mets. He gave up three runs — one earned — in a 32-pitch first but delivered six solid innings against his former team.

“We all know the talent in here and what we’re capable of. We just have to do it,” Wheeler said.

Lindor knocked in a run with a grounder, extending his career-best RBI streak to seven games. That’s the longest by a Mets player since Lucas Duda in 2014.

Philadelphia loaded the bases with nobody out in the third, but mustered only one run on Alec Bohm’s double-play grounder.

Bassitt walked three in the inning and needed 34 pitches to get through it. But he found a groove after that and rebounded from a dreadful start Tuesday in San Francisco.

The right-hander struck out seven in six innings of two-hit ball. He threw 100 pitches and retired his final 10 batters.