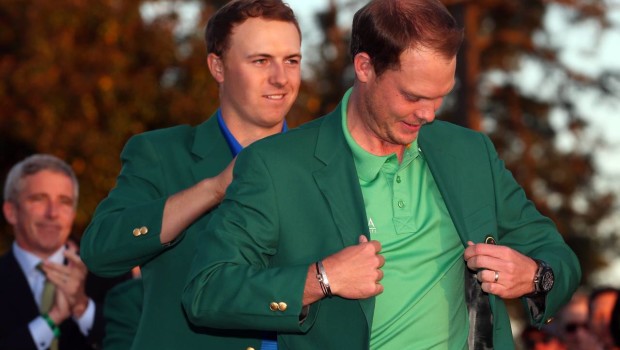 A MASTERS MELTDOWN TO REMEMBER FOR ALL-TIME

This is what it came to on Sunday at my house as we watched golf on Sunday:

At the moment the Masters slipped from his grasp, on the shot that turned a poor hole into an epic breakdown, Jordan Spieth (above left) turned his head. He couldn’t bear to watch his third shot on the 12th hole, because he knew where it was headed, and the splash confirmed it: Another ball into Rae’s Creek, the most famous little stream in golf and now a morgue for Spieth’s run at history.

Roughly a half-hour earlier, Spieth approached the 10th tee at Augusta National Golf Club on Sunday threatening to run away with his second consecutive green jacket. He led the field by five strokes, at 7 under par. He was to become the youngest player to win the tournament in consecutive years and the first to do so while leading after every round. Until he wasn’t.

Bogeys by Spieth on the 10th and 11th holes and a quadruple-bogey on No. 12 upended the leaderboard and opened the door for Danny Willett of England to win the Masters.

Mired at even-par after five holes, Willett reeled off five birdies in his next 11 to hold off Spieth and Lee Westwood and win his first green jacket. Willett, 28 years old, shot a 67 to finish at 5 under, becoming only the second Englishman to win the Masters and the first since Nick Faldo in 1996.

“I’m nearly speechless,” Willett said at an outdoor ceremony, moments after Spieth had to place the green jacket over his shoulders, in keeping with tradition.

After sinking a two-foot par putt on the 18th hole, Willett bounded toward the scoring area, smiled and threw his arm around his caddie, Jonathan Smart. The only question was whether his lead would hold.

Playing in the last group, Spieth rebounded with birdies on the 13th and 15th holes to put himself two strokes back with three holes to play. But he had to settle for par on No. 16 after missing a five-foot birdie putt and bogeyed the 17th.

With that, CBS cameras showed Willett on an indoor couch hugging Smart and agent Chubby Chandler. Their laughs were of equal parts elation and disbelief.

“It all happened very, very quick,” Willett said. “It was all a bit surreal.”

A native of Sheffield, England, Willett had never won on the PGA Tour, though it wasn’t for lack of ability. He plays primarily on the European Tour, where he had won four times. He finished tied for sixth at last year’s British Open and began the week ranked No. 12 in the world.

He may have been the best golfer in the world that only avid fans of the sport had heard of. And he might have remained in obscurity a while longer had it not been for the birth of his first child.

Late last month, Willett said he would skip the Masters if his wife, Nicole, was still pregnant with their son, who was due the week of the tournament. But Zachariah James Willett was born one week early, so his father made the trip to Augusta, after all.

As he watched Spieth finish his round, Willett sat with his cell phone pressed to his ear, talking to his wife.

“She said, ‘Well done,’” Willett said. “The line was a bit crackly. I’ll obviously call her after this if she’s still awake. I’m sure they will be.”

Willett talked about how improbable it all seemed back when Spieth was at 7 under, but everyone in the room avoided any specific mention of what happened on the par-3 12th hole. It would have been too cruel.

After Spieth’s tee shot bounced off the second cut of grass in front of the green and trickled down into the creek, he took a drop and a one-stroke penalty, placing the ball 68 yards from the pin. His next shot didn’t even touch land before it hit the water. His fifth shot landed in a back bunker, from where he finally got up and down for a 7.

“I was playing a dream-come-true front nine,” Spieth said. “I knew par was good enough and maybe that was what hurt me. I wasn’t quite aggressive enough.” He added, “Just a lapse in concentration on 12, and it cost me.”

Three days in a row, Spieth had a chance to take a commanding lead over the rest of the field. And while he remained ahead after Friday and Saturday, his undoing late Sunday fit a pattern. In his last three rounds of the tournament, Spieth bogeyed the 17th hole three times and finished a combined 11 over par on the back nine.

As Spieth trudged off the 18th green, he passed a horde of fans along the ropes, three of whom uttered the same three words, a phrase that was unthinkable just a short while earlier.