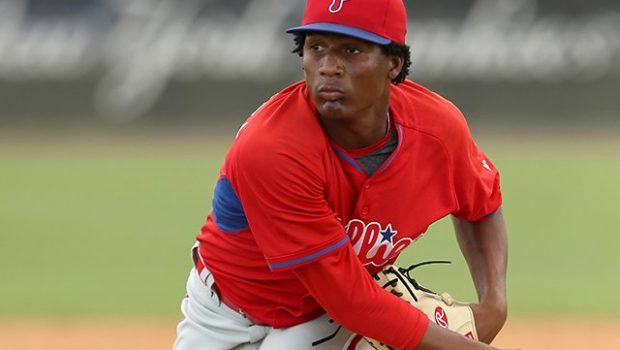 MARLINS SWEEP DROPS PHILS TO 3RD, THANKS TO SIXTO SANCHEZ!

A lost Sunday in Miami was made even worse by the fact that their ex-phenom, whom they traded for catcher JT Realmuto, came back to bite them.

And Realmuto didn’t play in the twinbill due to injury.

Braxton Garrett allowed three hits and the Miami Marlins beat the Phillies 8-1 to complete a doubleheader sweep and leapfrog Philly for second place in the NL East.

Garrett, a 23-year-old left-hander, was recalled as Miami’s 29th man. Garrett (1-0) allowed one run, struck out six and walked two, giving up a second-inning homer to Alex Bohm, who is 10 for 20 in the series.

Miami (23-21) has won four of the first six-games against the Phillies (23-22) in the major leagues’ first seven-game, regular-season series since 1967. The teams play again today.

Zach Eflin (2-2) allowed four runs, eight hits and two walks in four-plus innings for the Phillies, who have lost five of seven.

“It’s frustrating for all of us,” Phils manager Joe Girardi said. “We just didn’t hit much today for whatever reason.”

Aguilar, Matt Joyce and Brian Anderson hit RBI singles in the first, and Aguilar made it 4-1 with an RBI double in the third. Chad Wallach added a two-run homer in the sixth off Ranger Suarez.

In the opener, Sixto Sanchez faced the organization that traded him along with catcher Jorge Alfaro for Realmuto before the 2019 season. Realmuto sat out the doubleheader after getting banged up Saturday.

“It motivated me a lot that I was facing the Phillies,” Sanchez said in Spanish. “I held my head high, knowing I could beat the Phillies. Thank God we were able to win.”

Realmuto felt hip discomfort running out a ground ball Saturday. First baseman Rhys Hoskins did not play after favoring his left arm following a collision with Dickerson, who was attempting to beat out a grounder.

Hoskins had an X-ray on his left forearm and the results were negative, Girardi said. Realmuto and Hoskins will probably have MRIs to better define the severity of their injuries.

Miami shortstop Miguel Rojas did not play the first game after jamming his right middle finger when he tripped while running to his position before Saturday’s game but went 2 for 3 with a sixth-inning, two-run double in game two.

“Huge day for us as a team and as an organization,” Rojas said.

“I went after him and was able to locate the pitches correctly and get him,” Sanchez said of Harper.

Rookie Ramon Rosso (0-1) made his first big league start after five relief appearances and allowed two runs, two hits and three walks in 2 1/3 innings. Rosso was added to the Phillies’ active roster as the 29th man.

Andrew Knapp hit a sacrifice fly in the second, but the Marlins went ahead on RBI singles by Corey Dickerson and Starling Marte. Connor Brogdon relieved Rosso with the bases loaded and struck out Garrett Cooper and Isan Diaz. Brogdon recalled from the alternate training site Sunday, retired all seven batters he faced, striking out four.