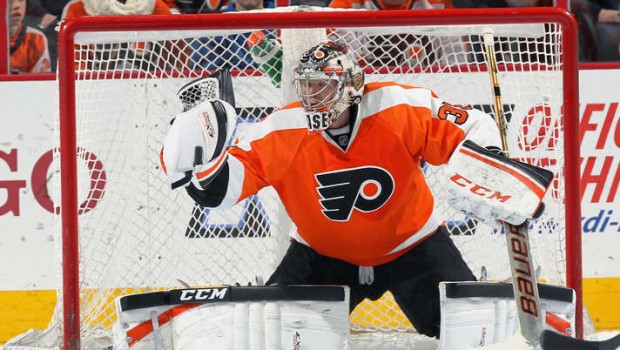 A FAST START IS VITAL TO FLYERS’ 2016 PLAYOFF CHANCES

The Flyers will return most of a defense group that struggled last season, so goalie Steve Mason will need to stay at a similarly high level this season for the Flyers to make the playoffs.

The Flyers head to Newark tonight for their last exhibition game against the Devils — who by the way are owned by Josh Harris, the same fellow who owns the Sixers, which dumb-o Glen Macnow thinks should be the cause of Flyer fan outrage!

If Flyers fans are in fact outraged it should be because they haven’t won a Stanley Cup since Madonna was 16, and the chances of making the playoffs this season are marginal at best.

Which even Adam Kimelman of NHL.com confirms in this preview:

How it ended: On March 7 the Flyers were leading the Bruins and 15 seconds from pulling within two points of Boston for the final East wild card. But the Bruins rallied to win in overtime and the next day the Flyers lost to the New Jersey Devils. After that weekend the Flyers finished 5-6-5.

How they get in:

1. Find secondary scoring — Wayne Simmonds (28 goals), Claude Giroux (25) and Jakub Voracek (22) combined for 75 goals, and Voracek (fourth, 81 points) and Giroux (tied for 10th, 71 points) were among the League’s top point producers. However, the Flyers had one other player reach 20 goals and Simmonds was the only other forward to reach 50 points.

Salary-cap constraints kept the Flyers from improving their offense, so it’s incumbent upon the holdover players to step up. Sean Couturier scored a personal NHL-best 15 goals last season despite starting 39.89 percent of his 5-on-5 shifts in the offensive zone, fewest among regular Flyers forwards. He signed a six-year contract July 28, so more will be expected of him. Brayden Schenn had 18 goals and a personal NHL-best of 47 points last season, and Matt Read had at least 22 goals in two of his first three seasons before slumping to eight goals last season, partly because of his decision to play through a high ankle sprain.

Vincent Lecavalier is sixth among active players with 411 goals and should have a clean slate playing for a new coach, as should Sam Gagner, acquired from the Arizona Coyotes in June. The pieces are in place; now they need to produce.

2. A Mason repeat performance — Steve Mason didn’t get any serious Vezina Trophy consideration last season, but his play in 2014-15 was better than people might realize. According to war-on-ice.com, among goaltenders to play at least 2,000 minutes, his .944 save percentage at 5-on-5 was the best in the League, and he was one of only three goaltenders to have top-11 save percentages against low-, medium- and high-danger shots. He faced an average of 30.6 shots at even strength per game, sixth-most in the League, but his 2.25 goals-against average was better than the 2.29 he had in 2008-09, when he won the Calder Trophy. The Flyers will return most of a defense group that struggled last season, so Mason will need to stay at a similarly high level this season for the Flyers to make the playoffs.

3. A better start to the season — The Flyers have spent training camp learning the way new coach Dave Hakstol wants them to play. Picking it up fast will be critical because slow starts have been a big reason the Flyers have missed the playoffs two of the past three seasons. In 2012-13 they started 2-6-0, in 2013-14 they started 1-7-0 but recovered to make the playoffs, and last season they started 1-3-2.

General manager Ron Hextall believes the energy it takes to dig out of an early hole can have repercussions later in the season. Though the Flyers can’t clinch a playoff spot in October, getting one in April will be easier with a stronger start.