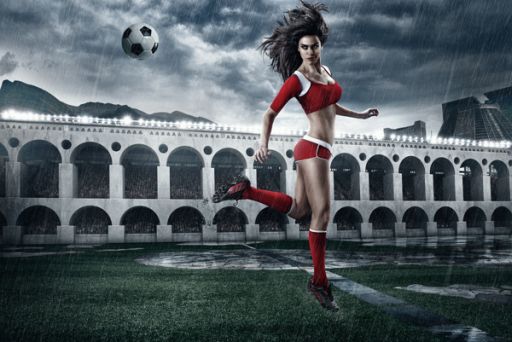 A CONTRARIAN'S VIEW OF THE WORLD CUP

Brazil is hosting the World Cup, and, well, it’s not quite ready.For instance, the new international media center in Curitiba is unfinished, so journalists will be housed in parking-lot tents, which, to be sure, will aptly reflect the state of journalism these days. More importantly, many of the stadiums in the 12 host cities are also in disarray. Sources tell me some fields will have only one goal in place, which means some matches might resemble half-court, pickup basketball games.

P.S. Brazil also is running behind in preparation to host the next Olympics, with talk that there may be a slight delay. So . . . hello, 2017 Summer Games!

Russia is hosting the next World Cup. Of course, by 2018, the Russian empire could extend west to Poland and east to Alaska, so host cities are up in the air. Warsaw and Anchorage should be on high alert!

Qatar is scheduled to host the 2022 World Cup. Alleged bribes aside, this appears to be an administrative mistake that might be too late to correct.

Soccer remains the world’s game, except in the good old USA.To be fair, the World Cup garners immense interest in the New World; it is riveting and resonates from coast to coast. On the other hand, Major League Soccer remains a niche game — like duckpin bowling or cockfighting — with regional pockets of interest.

All MLS games are broadcast somewhere, though many are not viewed anywhere.

Group G this year is the so-called “Group of Death,” with the United States drawing Germany, Portugal and Ghana. Incidentally, there is a culinary “Group of Death” within our borders — in a one-mile stretch of Lenwood, Calif., off Interstate 15, there is an Arby’s, Subway, Chili’s, Baja Fresh, Denny’s, IHOP, Del Taco, Carl’s Jr., Godfather Pizza, El Pollo Loco, Panda Express and Jack in the Box.

The United States has never won the World Cup. This owes to the fact soccer does not play to America’s strengths: military might, industrial wealth, venture capitalism, political polarization, Hollywood infotainment, occasional gun violence and overpriced caramel macchiatos at Starbucks.

Only eight countries have won the World Cup. Brazil has five titles, Italy four, Germany three, Argentina and Uruguay two each and England, France and Spain one each.

Coincidentally, these nations produce some of the world’s finest beer and wine.

The first World Cup was staged in 1930 in Uruguay.It has been held every four years since, with the exception of 1942 (because of World War II) and 1946 (because of countless Delta flight delays).

Nana Kwaku Bonsam, a Ghanian witch doctor, claims he is responsible for the knee woes besetting Portuguese superstar Cristiano Ronaldo, saying the injury “can never be cured by any medic.” I was going to blame Obamacare.

Mexican Coach Miguel Herrera has recommended his players keep their pants on before play begins — no sex, he says.To be honest, I know I have done some of my best work during long periods of involuntary abstinence.

ESPN has the World Cup cornered — heck, ESPN has the whole world cornered.Every second of every game will be on ABC, ESPN or ESPN2, plus WatchESPN or ESPN3 online, and you can even tune in to all 64 matches on your smartphone or ESPN FC app. In my home, I also can access ESPN game coverage through my microwave oven and master-bath showerhead.

And, finally, the World Cup gets my vote if for no other reason than . . .In soccer, there are no timeout stoppages piled on top of timeout stoppages, no end-of-match parade to the foul line and no replay. Then again, penalty kicks are a bit unfortunate.

Actually, this just in — the matches may be fixed.That’s not good.

Norman Chad writes “The Couch Slouch” a weekly, syndicated sports humor column. Chad is the co-host of ESPN’s World Series of Poker telecast and is the author of the book “Hold On, Honey, I’ll Take You to the Hospital at Halftime”.