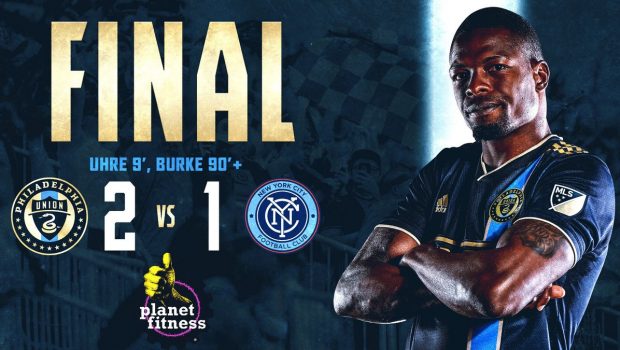 Cory Burke scored the tie-breaker in the 96th minute and the Union survived blowing a late lead and moved into first place in the Eastern Conference with a 2-1 victory over visiting New York City FC.

Burke was credited with the game-winner when he used his left foot to deflect a long shot by Jose Martinez past NYCFC goalkeeper Sean Johnson. Burke was initially believed to be offsides, but video review credited the defender with his fourth goal of the season.

Burke’s clutch goal saved the Union from another draw after they conceded the tying goal to Valentin Castellanos on a penalty kick in the 89th minute.

Castellanos was awarded a penalty kick when Philadelphia defender Kai Wagner was whistled for a hand ball. He easily scored his eighth goal of the season by using a stutter step to get Andre Blake to go to his left and then beat the Philadelphia goalkeeper with a right-footed shot that wound up in the bottom left corner.

Mikael Uhre scored in the ninth minute as Philadelphia did little offensively until Burke’s goal despite holding possession for 41.4% of the match.

Blake made four saves to notch his second win of the year over NYCFC.

Uhre opened the scoring when he got a long cross from Alejandro Bedoya, slipped past NYCFC defender Maxime Chanot and sent a left-footed shot from the center of the box into the back of the net.

After putting Philadelphia ahead, Uhre nearly scored seven minutes later, but Johnson stopped his right-footed shot from close range. Johnson also denied a header from Jack Elliott in the 18th minute and then stopped Julian Carranza’s attempt in the 30th.