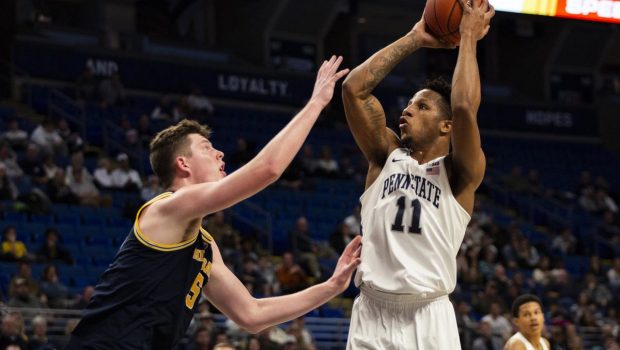 The last six times Michigan and Penn State have met at the the Nits’ Bryce Jordan Center, the games have been decided by six points or less.

Last night was no different.

Powered by 26 points and 12 rebounds from Lamar Stevens and a 40 percent three-point shooting mark as a team, the unranked Nittany Lions toppled No. 6 Michigan, 75-69.

The Nittany Lions shot well from outside the arc, but they also got the best of the Wolverines in the paint. Penn State outrebounded Michigan 36-26, outscored them in the paint 34-30, and had three blocks. A pair of technical fouls did not help Michigan’s chances at winning this game.

In the win, Stevens also notched his 600th career rebound.

Despite their record (9-15; 2-11 Big Ten) it’s the second time this season the Nittany Lions have beaten a ranked opponent. On Nov. 27, they topped then-ranked No. 13 Virginia Tech.

With seven games remaining, the Nittany Lions have a chance to build momentum and get on the right track heading into the Big Ten tournament.