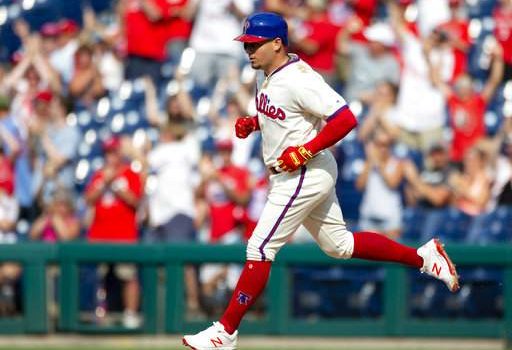 The surging Phillies found a way to win yesterday even though their ace was roughed up.

And that’s a characteristic of winning teams, which the Phillies have become.

Asdrubal Cabrera hit a tiebreaking two-run homer in the eighth inning as the Phillies completed a four-game sweep of the Miami Marlins with a 5-3 victory.

Cabrera, acquired in a July 27 trade with the New York Mets, crushed a 2-0 slider from Drew Steckenrider (3-2) into the right field seats for his 20th homer and his second in as many days.

Pat Nehsek (1-0) pitched a perfect eighth and Tommy Hunter worked the ninth for his second save as the Phillies overcame a mediocre outing from Aaron Nola for their fifth straight win. Philadelphia improved to an NL-best 38-18 at home and maintained its 1½-game lead over Atlanta atop the NL East.

Derek Dietrich hit a two-run home run off Nola and Justin Bour tied it with a solo shot off Seranthony Dominguez in a three-run seventh for the Marlins, who have dropped six straight and 10 of 13.

The Phillies had taken a 3-0 lead on Odubel Herrera’s two-run single and Maikel Franco’s RBI single in the sixth.

On a 90-degree day in which the Phillies’ 2008 World Series-winning team was honored, Nola didn’t have his best stuff and was lifted after Dietrich’s 14th homer with no outs. Nola allowed seven hits and two walks while striking out two as he was denied his 13th win.

Marlins starter Dan Straily surrendered only one hit but was replaced after 5 1/3 innings following five walks and a hit batter that pushed his pitch count to 103. Herrera and Franco then delivered ground singles off lefty Adam Conley.