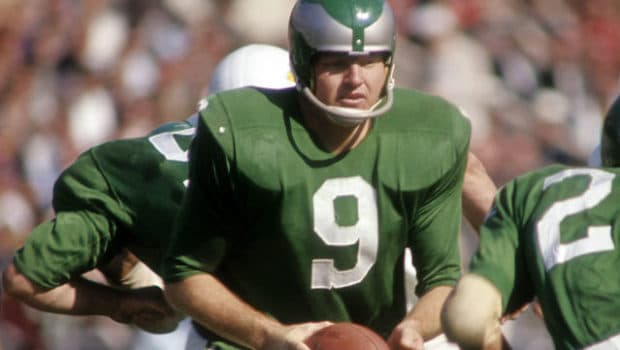 AT 83, EX-EAGLE QB SONNY JURGENSEN STILL HAS SOMETHING TO SAY!

Sonny Jurgensen hasn’t been the Eagles quarterback since 1964, when he was traded to the Washington Redskins, but he’s still making news!

Jurgensen was a Hall of Fame quarterback whose NFL career spanned 18 seasons.

And at age 83, Jurgensen is not ready to call it quits.

Jurgensen told the Washington Post he’ll still be calling games on radio in Washington this season, after initially thinking he was going to retire from broadcasting.

“I had thought about hanging it up because I’d been doing it 35 years,” Jurgensen told the Post. “I came to Florida, and I thought about it. I said, ‘I’ve got to have something to do. I was somewhat bored. So I went back to ‘em and said, ‘You know, I’m a little bored.’”

So Jurgensen, who turns 83 in August, agreed with the team that he’ll work the eight home games in Washington but not travel to any road games.

“It’s very nice of them,” Jurgensen said. “I’m looking forward to it, I really am.”

Jurgensen was drafted by the Eagles in 1957 and was a first-team All-Pro for them in 1961. He was traded to Washington in 1964 and played there until 1974. He is in both teams’ halls of fame as well as the Pro Football Hall of Fame.