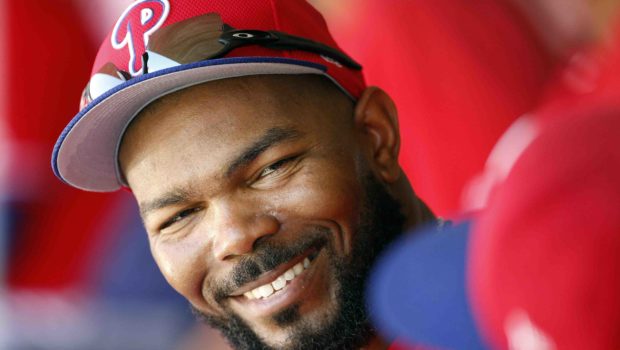 IS 81 WINS ENOUGH TO GET PHILLIES INTO FIRST PLAYOFFS SINCE 2011?

Manager Pete Mackanin and the front office have modest goals for the rebuilding Phillies this season, but the players have loftier expectations. They won’t be content holding down a spot until a prospect is ready to take their job.

”I think we’re going to surprise a lot of people,” catcher Cameron Rupp said. ”We’re in a tough division. Pitching in our division has been at the top the last few years but we’re going to come out to win every ballgame.”

The Phillies have missed the postseason five straight years after winning the NL East five consecutive seasons. They haven’t had a winning record since 2011 and Mackanin set the bar at 81 wins. That would be an eight-game improvement and a step in the right direction.

”You can see it in their eyes,” he said. ”They feel like they’re going to be a better team this year.”

There’s a special camaraderie among the players. It’s a close-knit group with no big egos and no holdovers from the 2008 World Series championship team.

”All these guys here are good guys,” said Freddy Galvis, who has played with second baseman Cesar Hernandez since they were kids in Venezuela. ”We stick together. We have the same goal. We try to stay on the same page. We try to have fun, play hard and work hard and we go from there. I think the communication and friendship we have in the clubhouse is much better than last year.”

Whether that translates into a winning season will play out over the next six months.

Here’s some things to know about the Phillies entering 2017:

NEW LOOK: Ryan Howard, the last man standing from the team’s glory days, is gone. The Phillies replaced the slugger with a pair of veterans who should upgrade the corner outfield. LF Howie Kendrick (above) and RF Michael Saunders give the lineup more balance and offer more protection for cleanup hitter Maikel Franco. Veteran RHP Clay Buchholz also was acquired from Boston and gives a promising rotation more experience. If he returns to All-Star form, the staff could be formidable. Relievers Joaquin Benoit and Pat Neshek add depth to the bullpen.

ROOKIES TO WATCH: They’ll start the season at Triple-A Lehigh Valley but SS J.P. Crawford, C Jorge Alfaro and OFs Nick Williams, Roman Quinn and Dylan Cozens are among the top prospects knocking on the door along with RHPs Mark Appel, Nick Pinetta and Ben Lively. RHPs Zach Eflin and Jake Thompsonalready showed their stuff in the majors and could be first in line for a call-up. C/1B Andrew Knapp and 1B/OF Brock Stassi could start the season on the Phillies’ bench.

CLOSING TIME: Jeanmar Gomez, who had 37 saves in 43 chances, starts the season as the closer. He struggled last September and Mackanin has several options – Neshek, Benoit and Hector Neris – if Gomez falters again.

BREAKOUT STAR: Franco had 25 homers and 88 RBIs last season, but the Phillies expect more from a guy Hall of Fame 3B Mike Schmidt called an MVP candidate. Franco needs to show more plate discipline. If he becomes a more selective hitter, Franco has the potential for a monster season.

FANTASY STUD: Hernandez hit .294 with a .371 OBP, an NL-leading 11 triples and stole 17 bases. He worked on his baserunning to steal more bases and should be productive for a 2B.