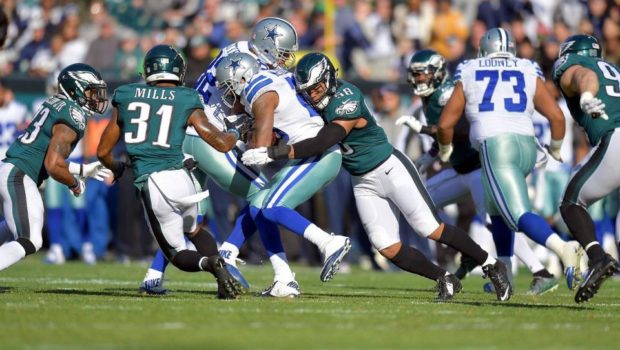 The Eagles beat the Cowboys yesterday, 27-13, to finish 2016 at 7-9 and in the afterglow of that win over Dallas’ scrubs, the Birds were bullish on their chances in 2017:

“Definitely,” offensive tackle Lane Johnson said. “Hopefully next year, it will be our year.”

The Eagle started the season 3-0, and moved to 4-2 before losing seven of their next 10 games.

“A couple plays. A couple plays here and there. That is it,” rookie cornerback Jalen Mills said. “That is all it comes down to.”

Although it didn’t launch them into the playoffs, it was clear the team’s ending to the season — beating two playoff-bound teams in the Giants and Dallas Cowboys — is a big reason why the team is so confident they can contend for a playoff spot next season.

“To win these last two games, it will bring a lot of confidence into the offseason,” quarterback Carson Wentz said. “We are building something special. We truly believe that in that locker room. I said to all the guys I saw, when we come back, it’s time to go.”

As is the case every season in the NFL, however, there will likely be plenty of changes to this Eagles’ team this offseason.

“There will be a lot of more pieces added to the puzzle,” Johnson said.

If, or when, they pieces are added, however, players were clear about thing — they expect to be playing in the postseason next year.

“With this team that we have, the knowledge we are going to get from this year to next year, with a rookie quarterback, rookie head coach,” Mills said, “it’s going to be good for sure next year.”