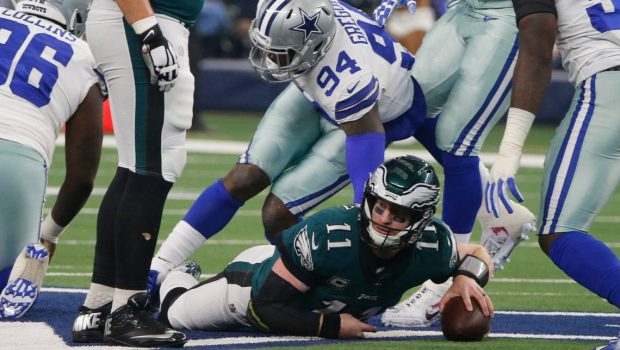 6-7 EAGLES PLAYOFF HOPES NOT DEAD, BUT ON LIFE SUPPORT!

But they’re on life support.

And the Cowboys haven’t clinched the NFC East, but it’s over except for mathematically.

Dallas’ 29-23 overtime victory over the Eagles gives the Cowboys a two-game lead on the Eagles and Redskins with three games to play. The Cowboys are 8-5. Washington and Philly are 6-7, and Dallas swept the Eagles.

The Cowboys have Indianapolis, Tampa Bay and the Giants remaining. The Eagles have the Rams, Texans and Washington. With Washington on its fourth starting quarterback, it’s not even worth considering its chances.

The Cowboys overcame a 3-5 start, winning their fifth consecutive game in dramatic fashion.

Cowboys quarterback Dak Prescott had the most passing yards of his career with 455. It was his first 300-yard game this season and the fourth of his career.

But Prescott also threw two interceptions and lost a fumble to keep Philadelphia in it.

Cooper was the hero, with 10 catches for 217 yards and three touchdowns. He now 26 catches for 473 yards and five touchdowns in his past three games. He had 22 catches for 280 yards and a touchdown in six games with Oakland this season before the Raiders traded him for a first-round pick.

Ezekiel Elliott had 28 carries for 114 yards, including a 2-yard run on fourth-and-one in overtime. He also caught 12 passes for 79 yards.