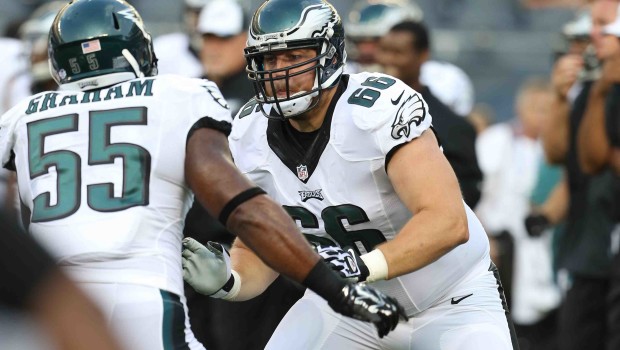 Andrew Gardner — all 6-6, 305 pounds of him — is now the leader in the clubhouse to start at right guard for the Eagles.

“A guy like Gardner might not be as quick or explosive, but he has a lot more size and he’s a lot longer,” Eagles O-line coach Jeff Stoutland told the Delaware County Daily Times.

“So people have to go a lot further to get around him. Gardner is a very good athlete for his size and one would say he’s more like a tackle, but he does a really good job playing guard. What we do offensively from a zone standpoint and a fast-moving standpoint, it’s hard to have those really big type guards. So he really fits well for us.”

Stoutland also mentioned how Matt Tobin is “a little unnatural” on the right side and that John Moffitt, who had quit the game, is improving but “you can tell he’s been off a couple years.”

Veteran Julian Vandervelde is healthy after back surgery, but obviously doesn’t have the size of the others, although he offers versatility as a center. That’s it for the serious candidates.

But even the taciturn Eagles coach Chip Kelly is happy with Gardner, who stepped in last year when veteran Todd Herremans blew up a biceps.

When the Eagles open their intra-squad practices against the Baltimore Ravens, Gardner was in there, in front and to the right of quarterback Sam Bradford.

“The one thing about Andrew is he’s very consistent and you know what you’re getting,” Kelly said. “He’s extremely intelligent, knows how to run angles and knows where he’s going on every play. He does what you ask him to do. He’s not a flashy guy that’s going to go out there and you’re going to see him drive some guy back 15 yards and put him on his back and pancake him. But he always seems to be in the right spot and I think he’s worked really hard at it.”

A sixth-round pick in 2009, Gardner started eight games last year for the Eagles, joining them after playing just eight games in his first four NFL seasons, including three with the Houston Texans.

“I thought this was a good system fit,” Gardner said. “I felt like Houston was, as well. I just feel like I’ve had an opportunity here. Unfortunately it came when some other guys got hurt. But I’ve always been told when your chance comes, make the most of it. Hopefully I’ve done that and now I’m maybe in the mix to be the starter this year.”