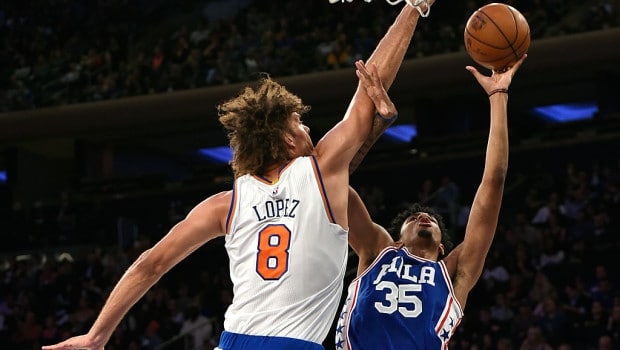 Sixers power forward Christian Wood is no longer flying under the radar!

“A big chip on my shoulder,” Wood said after scoring 13 points and grabbing 10 rebounds in the Sixers’ 94-88 loss to the Knicks last night at Madison Square Garden

Projected as a first-round pick out of UNLV, Wood slipped out of the first round on draft night. By the time the second round had finished, Wood did not hear his name called at all.

“I’m trying to make the team, so I’m doing whatever I can,” said Wood, who played for Houston during the summer league. “I’m hustling, going for loose balls and doing anything I can to try and make the team.”

With big men Jahlil Okafor and Nerlens Noel on the bench nursing aches and pains, Wood was the catalyst as the Sixers erased a 15-point first-half deficit to climb to within two field goals of the lead in the fourth quarter.

“You saw him bother people at the rim,” coach Brett Brown said of Wood’s play. “You have to walk out of the gym looking at that kid and be impressed — especially at his age.”

When starting center Richaun Holmes got into early foul trouble, Wood made the most out of his opportunity.

Wood, who turned 20 during training camp, not only bothered the Knicks at the rim, but also was a threat from the outside. The 6-foot-11 power forward went 1 for 4 from three-point range and hit a 17-footer from the corner in addition to a couple of dunks.