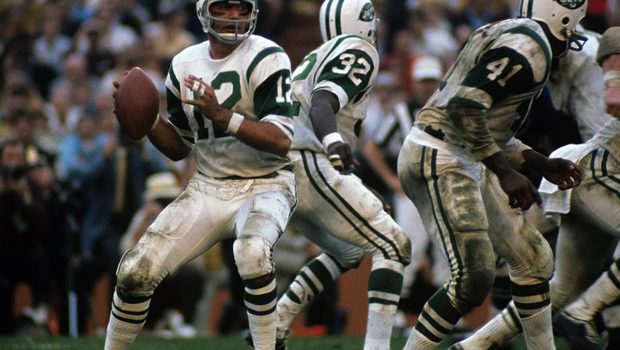 On January 12, 1969, at the Orange Bowl in Miami, the New York Jets of the American Football League defeat the NFL’s Baltimore Colts, 16-7, in Super Bowl, considered one of the biggest upsets in sports history.

The win was the first in the Super Bowl for the AFL, which merged with the NFL for the 1970 season.

But the Colts, who had a 15-1 record entering the game, trailed 16-0 after three quarters.

Namath, a four-year-veteran and former University of Alabama star, completed 17 of 28 passes for 206 yards and was named the game’s Most Valuable Player.

“We overcame our critics,” Namath told reporters in a jubilant Jets locker room. “Most people predicted a 42-13 loss.”

In the fourth quarter, backup quarterback Johnny Unitas—subbing for ineffective NFL MVP Earl Morrall—led the Colts on their only scoring drive.

Said Baltimore coach Don Shula: “We had more opportunities in the first half and just couldn’t get the blamed thing going. I don’t think we did anything right.”

Shula said the key to the game was Namath’s ability to exploit Baltimore’s weaknesses.

“He not only made me believe—he made us all believe,” said Jets rookie safety John Dockery said of Namath. “I never saw another fella like him in my life.”

54 years ago today, the biggest upset in Super Bowl history 💰