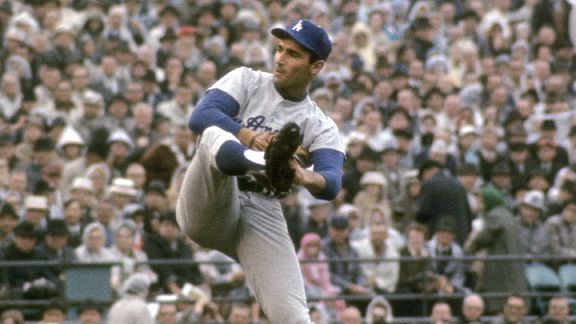 50 YOM KIPPURS AGO, THE GREAT SANDY KOUFAX STOOD TALL AS A JEW

This Yom Kippur, which begins at sundown tonight, marks the 50th anniversary of one of the most seminal moments in post-war American Jewish life, an event that occurred – or, to be more precise, one that didn’t – which had a profound impact on how US Jewry came to feel about itself and its place in society.

In 1965, the Day of Atonement coincided with October 6, the date on which the Los Angeles Dodgers were going up against the Minnesota Twins in the first game of the World Series.

Baseball’s best pitcher, the Dodgers’ Sandy Koufax, was expected to pitch the opener. With a dazzling overhand curveball that seemed to defy gravity and a blazing fastball that was virtually unhittable, it is no wonder that Koufax was dubbed by Hall of Famer Ernie Banks as “the greatest pitcher I ever saw”. Or, as Sports Illustrated’s Tom Verducci once wrote, “Koufax was so good, he once taped a postgame radio show with Vin Scully before the game.”

But Koufax wasn’t just a baseball superstar. He was also a Jew from Brooklyn and a proud one at that. And although he was completely secular, he found himself facing a dilemma: stand by his teammates and play or respect the sanctity of the day.

Koufax chose the latter, sitting out the first game (which the Dodgers went on to lose). His choice caused a sensation among an entire generation of American Jews, from the most observant to the least active. It underlined that Jews need not feel discomfort about their identity while taking part in American public life.

After all, if young Sandy Koufax could place fidelity to tradition ahead of pitching in the World Series without fear of a backlash, then clearly America was a place where Jews could assert their identity more securely than previously thought.

In an interview, Jane Leavy, author of the New York Times bestselling book “Sandy Koufax: A Lefty’s Legacy”, told me that, “Sandy’s decision not to pitch had a tremendous impact on the American Jewish community, on God knows how many Bar Mitzvah boys whose rabbis always summoned Koufax as an example of why they should be in shul not on a baseball field on the High Holidays, on those rabbis who have sermonized at length on Koufax’s impact on the American Jewish community, and on countless Jews—practicing and cultural—who saw in Koufax an exemplar of Jewishness, refuting negative stereotypes in his actions and his being.”

Don’t forget: Koufax’s decision came just 20 years after the Holocaust and at a time when many American Jews were still subject to discrimination in hiring and housing and fearful of being identified as “too Jewish”.

Suddenly, their fears seemed to be a thing of the past.

As historian Rabbi Berel Wein told the New York Jewish Week last year, “When Sandy Koufax stated that he would not pitch on Yom Kippur, many Jews in America stood a little taller and had a better sense of self-worth and Jewish pride. That was as true in the Orthodox observant community as it was in the general Jewish community.”

Koufax also helped to shatter the common stereotype that Jews and sports did not mix, or that the People of the Book could not excel on the playing field. In that sense, he paved the way for greater acceptance of Jews in American society.

Despite the renown which followed his decision not to pitch, to this day it remains unclear what Koufax’s reasons were, or what he did on that fateful Yom Kippur.

Leavy told me, “I believe that it was a reflexive, dutiful decision for him. He did it out of respect for his parents, then alive, his community, his sense of right and wrong.”

“From his point of view,” she said, “it was no big deal because after all, the Dodgers had Don Drysdale to start in his place and so they flip-flopped in the starting rotation. I think he was surprised by the response of the Jewish community and a bit embarrassed by his elevation to the ranks of a New American Patriarch.”

Drysdale did indeed start the game, but he gave up seven runs in 2 2/3 innings. When Dodger manager Walter Alston made his way to the mound to take Drysdale out of the game, the pitcher handed him the ball, smiled and said, “I bet right now you wish I was Jewish, too.”

Koufax returned for the next game, which he lost, but rebounded in Game 5 of the series, when he pitched a complete game shutout. After just two days rest, he started the decisive seventh game, throwing a three-hit shutout to win the championship for the Dodgers, as well as his second World Series Most Valuable Player award.

Koufax, who is an extremely private person, has shied away from publicity, especially since his retirement due to an arthritic arm in 1966, and has rarely spoken in public about his decision not to pitch on Yom Kippur. Nor has he chosen to clear up the mystery of how he spent the day.

According to an article that appeared in a local St. Paul, Minnesota, newspaper prior to the start of the 1965 World Series, Koufax had left the team’s hotel in order to attend Yom Kippur services and said that he wouldn’t watch or listen to the game on the holy day.

And on the afternoon of Yom Kippur, Rabbi Bernard Raskas of Temple Aaron in St. Paul told his congregants that Koufax had attended services with them that morning but that he hadn’t wanted to violate the ballplayer’s privacy by singling him out in front of everyone.

Leavy, however, is adamant. “I do not believe he went to shul. As I stated in my book, I believe he stayed at the team hotel and spent the day alone.”

Whatever may have happened that day, by refusing to play on Yom Kippur, Sandy Koufax inadvertently entered American Jewry’s record books as a national figure, a courageous and confident Jew who did not let his professional success overwhelm his tribal loyalty.

His demurral despite the high stakes involved amounted to a “Sermon on the Pitcher’s Mound”, a timeless lesson in maintaining a sense of perspective on what is truly important in life.

Despite his career ending after just 12 seasons, Koufax later became the youngest player inducted into Baseball’s Hall of Fame, and many consider him to be one of the greatest left-handed pitchers in the game’s history.

But for many American Jews who were struggling to decide which part of their identity took precedence, Sandy Koufax will be remembered not so much for the pitches he threw as for the ones he chose not to.