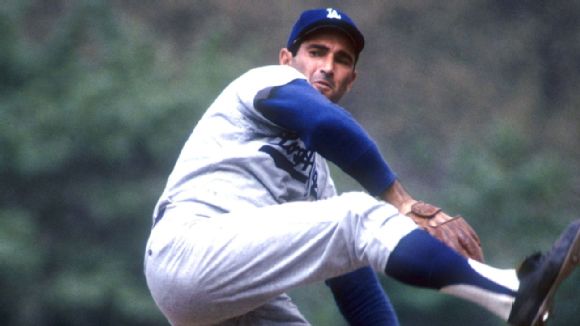 Fifty years ago on October 6, at the tender age of 30, Sandy Koufax bowed out of baseball. From 1962 to 1966, the Dodgers star had been an astonishing force in the sport, offering a five-year run of the most glorious performance by a pitcher ever in such a short span with four no-hitters (the last a perfect game). For five seasons in a row, Koufax led the National League in fewest runs and hits allowed per game. He became the first pitcher to average striking out over nine batters per game, and to give up less than seven hits a game.

When Koufax realized his injured arm couldn’t take any more, he quietly withdrew from baseball. No fanfare. No parade. No more pitching on two days’ rest or cresting 200 pitches in a game—both verboten today. In November, when the news of Koufax’s retirement broke, most of the Dodgers, playing overseas in Japan, were flabbergasted when asked for comment by the press. Except for one. On October 6, in what would become his final game ever, Koufax had gotten crushed by the Baltimore Orioles in the second game of the World Series, 6-0. Later, on the flight back from Baltimore, the outfielder Al Ferrara—who had grown up near Koufax in the Bensonhurst neighborhood of Brooklyn—found himself sitting alongside the master. Ferrara absently talked about the off-season and getting ready for next year.

“This is it,” Koufax said to Ferrara, who was troubled by his words. Ferrara told no one, wondering if he had heard right. A few weeks later, with the team in another country, Koufax took his leave of it: