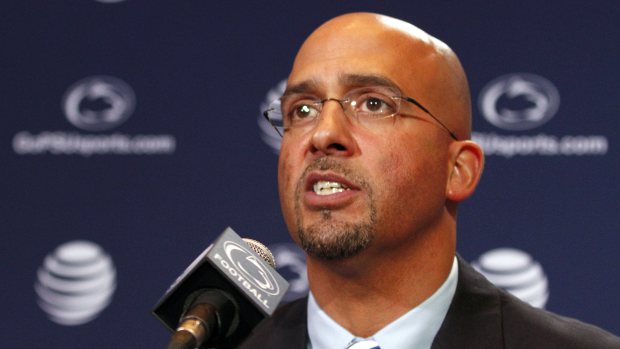 5 TAKEAWAYS FROM BLUE AND WHITE DAY

1. Be prepared for the return of the wildcat QB in the Penn State offense. The Lions tinkered with the wildcat in 2011 but former Penn State coach Bill O’Brien was not a wildcat guy. But it looks like new coach James Franklin (above) and his offensive coordinator, John Donovan, are. You saw the formation a lot with the Blue offense early, as QB Christian Hackenberg would line up as a wideout and the tailback, either Bill Belton or Cole Chiappialle, would take a direct snap and head up the field. “We did a lot of that down at Vandy and had some good success with it,” said Donovan, who was Franklin’s offensive coordinator at Vanderbilt. “That was just a showing of what we are working on.” Added Franklin: “You’re able to do (a) true 11-on-11, offense vs. defense. Every other offense you run, the defense has an advantage of plus-one on you.”

2. New defensive tackle Anthony Zettel looks like he is sitting on a breakout season. Yeah, it was a scrimmage. Yeah, the Penn State offensive line is beat up. But there was no overlooking the combination of strength and quickness Zettel, a former defensive end, displayed on the inside. The 6-4, 280-pounder finished with two tackles for loss (one a sack) while playing for the Blue team. And he was in the backfield on most plays. This redshirt junior appears to be all business.

3. Cornerbacks Trevor Williams and Jordan Smith are going to be on the field a lot in the fall. Coming into spring, there was a question who would play the corner spot opposite junior Jordan Lucas. Senior Adrian Amos has moved from corner to safety. There is an opening. Williams and Smith could both play, and PSU’s big nickel package (4-2-5) might be Williams, Smith and Lucas at corner with Amos and Ryan Keiser at safety. Both Williams and Smith, a junior and sophomore, respectively, played for the Blue team Saturday and looked good. Williams was credited with a 34-yard interception return and Smith was in on three tackles.

4. Chris Gulla looks like he is set as the team’s punter. Alex Butterworth is gone and there isn’t a scholarship punter on the roster. James Franklin is giving Gulla, a redshirt freshman, first shot and he didn’t disappoint, averaging 40.1 yards on seven attempts with a long kick of 50 yards. Granted, he wasn’t rushed, but Gulla looks like he has the leg for the job. “I think our special teams, Gulla did some nice things today,” Franklin said.

5. Multiple tight end sets might be the norm for the offense early in the season. The offense line is still a problem and first-team center Wendy Laurent, a redshirt sophomore, left the scrimmage with an apparent left leg injury. The only known commodity is redshirt junior left tackle Donovan Smith. Redshirt freshman tackle prospect Andrew Nelson didn’t play Saturday and senior guard Miles Dieffenbach also didn’t go, favoring one of his legs on the sideline. It’s messy, people. The Lions are going to do what they have to do to protect franchise quarterback Christian Hackenberg. It might mean keeping at least one tight end in to block.