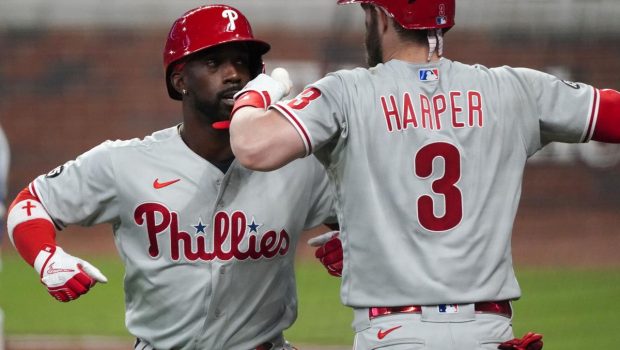 Freddie Freeman hit a two-run homer and drove in the go-ahead run with a grounder in the seventh inning to lead the Atlanta Braves to a 5-4 win over the Phillies.

Freeman hit a one-out grounder that left-hander José Alvarado fielded on the mound. Alvarado looked to second, but with the infield drawn in for a play at the plate, no fielder was covering the bag. Alvarado then threw late to the plate. Adrianza scored without a slide.

“You’ve got to put the ball in play sometimes and I was able to get one to Alvarado,” Freeman said.

Phillies manager Joe Girardi said he approved of Alvarado looking to second in hopes of starting a double play. He said the problem was shortstop Didi Gregorius broke for the grounder instead of covering second base.

“If you have a chance to turn a double play, I’m OK with you turning the double play,” Girardi said. “The thing is Didi’s instincts took him to the ball and Alvarado has no way to know.”

Adrianza also thought Alvarado was going to throw to second base.

“That’s why I didn’t slide,” Adrianza said. “Thank God I scored the run.”

Sean Newcomb (1-0) had strikeouts on four of his six outs in relief of Ian Anderson. The right-hander yielded four runs in 5 1/3 innings and gave up homers to Andrew McCutchen in the fifth and Bryce Harper in the sixth.

Will Smith pitched a perfect ninth for his second save.

The Phillies took a 2-0 lead on a two-run single by Gregorius. It was Philadelphia’s third consecutive single off Anderson, who walked McCutchen to open the game.

The lead didn’t survive the inning. Acuña doubled down the first-base line and scored on a double off the right-field wall by Ozzie Albies. Freeman’s two-run homer gave Atlanta a 3-2 lead before Zach Eflin recorded an out.

Freeman’s homer was his third overall and second in two days.

It was an ominous start to the game for the Phillies, who had not had a pitcher last longer than five innings since Eflin allowed one run in seven innings last Sunday against Atlanta.

After giving up the two-run single to Gregorius, Anderson struck out Jean Segura and Andrew Knapp to start a string of 13 consecutive outs before McCutchen’s tying homer to left field with two outs in the fifth.