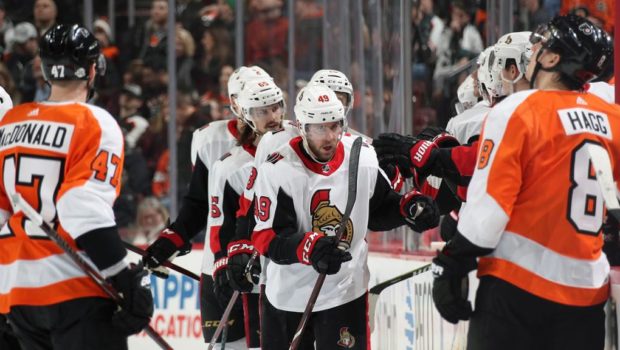 4TH STRAIGHT LOSS FOR FLYERS, 4-3 IN SHOOTOUT TO SENS!

The Ottawa Senators dealt Flyers their fourth straight loss, 4-3 in a shootout.

Mike Hoffmn scored the winner in the sixth round of the tiebreaker. He carried the puck into the slot, deked Flyers goalie Michael Neuvirth to the ice and reached around him to poke the puck in.

Flyers forward Nolan Patrick tied the game 3-3 when he scored with three seconds left in the third period. Craig Anderson stopped Shayne Gostisbehere’s point shot, but Patrick pulled the rebound out of traffic in front.

Sean Couturier and Scott Laughton scored for Philly (24-19-8), and Travis Konecny had his first three-assist game in the NHL. Michal Neuvirth made six saves after replacing Alex Lyon at the start of the third period. Lyon made 20 saves on 23 shots.

Duchene gave the Senators a 1-0 lead at 10:53 of the first period. He took a pass from Hoffman, cut around Scott Laughton on his drive to the net and roofed a shot from in close.

Brassard made it 2-0 when he stuffed a rebound between Lyon’s skate and the post at 11:32 to end an eight-game goal drought.

Couturier scored at 3:53 of the second period to make it 2-1. Anderson slid too far out of the net to play the rebound of Konecny’s shot, giving Couturier an open net when he got a pass from Radko Gudas.

The Senators took a 3-1 lead at 13:02 when DiDomenico finished a 2-on-1 with Ryan Dzingel that started when Flyers forwardClaude Giroux fell at the Senators blue line and lost the puck.

Duchene scored with three seconds remaining in the second, but the goal was overturned after a coach’s challenge by the Flyers that determined the play was offside.